Damage from the Himalayan military standoff will not be easily repaired 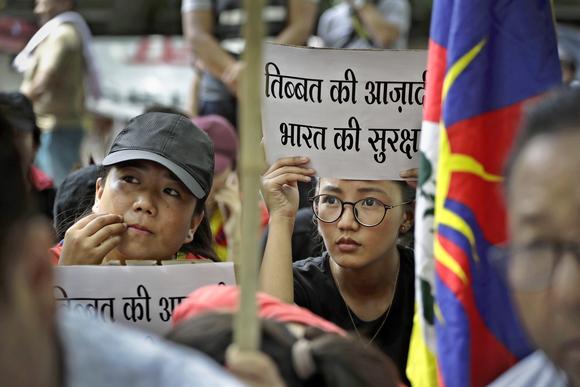 Exile Tibetans listen to a speaker during an Aug. 11 protest in New Delhi to show support for India in its Doklam standoff with China. The banners in local language read “Tibet’s independence is India’s security.” © AP

China and India have defused one of their worst border flare-ups in decades, which had threatened to trigger an armed conflict between the nuclear-armed Asian giants. However, the damage the 10-week troop standoff inflicted on the already frayed bilateral relationship will not be easy to repair. Indeed, the China-India divide over border, water, trade, maritime and other issues, including transportation and economic corridors, may only widen.

There is also the risk that the end of the face-off on the small Himalayan plateau of Doklam could prove just a temporary respite from border tensions before confrontation flares anew.

Beijing had all along insisted that if there was any dispute over Doklam — home to mainly Bhutanese shepherds — it was between China and tiny Bhutan. But, ultimately, it accepted a deal with the country it said had no role at all, India, which it labeled an “illegal trespasser.” The Chinese Communist Party and its People’s Liberation Army may find it difficult to live with a retreat that China was compelled to make after failing to intimidate India into submission through torrents of vitriol and warmongering.

China’s record under communist rule shows that it has at times retreated only to open a new front in the same area or elsewhere.

The Himalayan standoff was triggered when Chinese forces sought to change the territorial status quo by building a road through Doklam, the high-altitude Bhutanese plateau that China claims as its own. India, Bhutan’s security guarantor, intervened militarily and halted the construction, saying the road overlooking the triple border of Tibet, Bhutan and the Indian state of Sikkim threatened its own security.

The standoff ended on Aug. 28, the same day the state-owned China Daily had warned that India stood “to face retribution” over its intransigence. The Indian troops retreated 500 meters to the Indian side of the border, to a ridge-top post from where they can quickly intervene again if the PLA restarts work on the military road. China withdrew troops and construction equipment from the site while asserting the right to send armed patrols to the disputed plateau.

China sought to save face by spinning the deal as an Indian climbdown, camouflaging its own troop withdrawal from the site. It could not admit that it had withdrawn because it had claimed that Doklam — like the Japanese-administered Senkaku Islands in the East China Sea, or the disputed South China Sea — had been Chinese territory “since ancient times.” In reality, China is unlikely to be able to resume work on the road project, which perished when India called China’s bluff.

Standing up to China

More fundamentally, India, like Japan before it, has shown that if a neighbor is willing to stand up to China, it can be made to back away. Doklam is a defining event: For the first time since China’s success in expanding its control in the South China Sea by artificially creating seven islands and militarizing them, a rival power has stalled Chinese construction activity to change the status quo on a disputed territory. In a grudging admission about the Doklam setback, China’s ultranationalist Global Times newspaper said on Aug. 30: “China needs to enhance its deterrence to avoid external provocations.”

Beijing was left with little choice but to negotiate a deal after India showed that it would not be cowed. To “win without fighting,” as the ancient Chinese military theorist Sun Tzu recommended, Beijing made India the target of its new “three warfares” doctrine, which was first described in a 2008 Pentagon report to Congress. The standoff revealed how China blends psychological warfare with disinformation campaigns, media manipulation, and legal action or “lawfare” to mount intense pressure while presenting the other side as the aggressor and itself as the aggrieved party.

Repeated Chinese warnings to India to back down or face dire consequences, however, fell on deaf ears. India allowed the war of words to become one-sided by refusing to react to the almost daily Chinese verbal attacks.

Eventually, Beijing was forced to end the face-off through mutual disengagement of troops. Two factors forced Beijing’s hand. It wished to save the Sept. 3-5 summit in Xiamen, China, of the BRICS countries, a bloc comprising Brazil, China, India, Russia and South Africa. More importantly, it wanted to safeguard Chinese President Xi Jinping’s reputation in the run-up to the critical party congress this autumn. Had the standoff with India dragged on, it could potentially have taken a toll on Xi’s standing.

U.S. President Donald Trump’s administration also helped put pressure on Beijing by implicitly supporting the Indian and Bhutanese positions, including backing a “return to the status quo” that prevailed on Doklam before the road building began.

The deal with India was clinched shortly after Xi replaced Gen. Fang Fenghui with Gen. Li Zuocheng in the top PLA post that is equivalent to the chairman of the U.S. Joint Chiefs of Staff. This suggested that the removed chief, as head of the PLA’s operations, was an obstacle to a Doklam deal.

Despite China’s overall military superiority, India, with its terrain and tactical advantages, was in a stronger position in the triple border area. It could have prolonged the face-off until the onset of the harsh Himalayan winter, thus casting a cloud over the Chinese party congress. A protracted standoff would also have exacted increasing diplomatic costs for Beijing, given that India had dared to stand up to it, thus denting China’s reputed preeminence in Asia.

By reaching the deal, India effectively let China off the hook and did Xi an important favor at a time when he is focused on the party congress, which is expected to see him emerge as the most powerful Chinese leader since Mao Zedong. For New Delhi, salvaging Prime Minister Narendra Modi’s China visit for the BRICS summit, unfortunately, became an important consideration, although that grouping has increasingly come under Chinese sway.

But Beijing is unlikely to return the favor, and India’s decision to let China escape a strategic predicament of its own making could come back to haunt it.

China has tactically retreated because, beyond declaring war on India, it was running out of options. But without the distraction of a looming party congress, China could seek revenge for Doklam at a time and place of its choosing. Next time, the PLA is unlikely to make the mistake of encroaching onto an area where India enjoys the military advantage. It will choose a place where it can spring a nasty surprise and dictate terms to the Indian army.

With India already facing increasingly persistent PLA efforts to intrude into its borderlands, eternal vigilance holds the key to Himalayan peace. India’s army chief, Gen. Bipin Rawat, has cautioned that the country cannot be complacent because Doklam-style encroachments are likely to “increase in the future.” But while China uses the disputed long border with India as a justification to probe Indian defenses, India remains perennially in a reactive mode.

A grim reminder of the larger challenges in the bilateral relationship is China’s breach of legally binding obligations to supply India with hydrological data on upstream river flows in Tibet in order to facilitate flood forecasting and warnings. A third of India’s freshwater supply comes from river flows from Tibet. The current monsoon season has brought record flooding in parts of northern India.

Beijing has offered no explanation for its failure this year to honor bilateral accords that require it to transfer data on specific rivers to India annually from May 15 to Oct. 15. Had China been in India’s place, it would have linked the breach of commitments to the downstream floods and deaths. But India has been quiet. Timely transmission of data would have helped generate flood warnings, thus saving lives and reducing material losses in India’s northeast. The data denial apparently is designed to punish India for boycotting Xi’s Belt and Road infrastructure summit in Beijing in May.

When Beijing can breach formal bilateral agreements, will it continue to stick to the Doklam deal? In 2012, China and the Philippines reached a U.S.-brokered deal to withdraw naval vessels from around the disputed Scarborough Shoal. China gave the impression it was withdrawing its ships, only to return and capture the shoal.

China’s autocrats are actually undermining their country’s long-term interests by making a mortal enemy of India, with which they are currently running an annual trade surplus of nearly $60 billion. The cloistered process of decision-making in China has glossed over the far-reaching strategic ramifications of driving Asia’s most important geopolitical “swing state” into the U.S. camp.

Whatever happens next, Doklam illustrates China’s proclivity to miscalculate and overreach. India’s refusal to bend while talking peace offers other Asia-Pacific nations an example of how to manage Chinese coercion. Doklam also raises a broader question: Had U.S. President Barack Obama’s administration stood up to China in the South China Sea, would the seven artificial and now-militarized islands have been created? It is China’s success in altering the status quo there — without incurring any international costs — that has emboldened its territorial revisionism in the East China Sea and the Himalayas.

Brahma Chellaney is a geostrategist and the author of nine books, including the award-winning “Water, Peace, and War.”