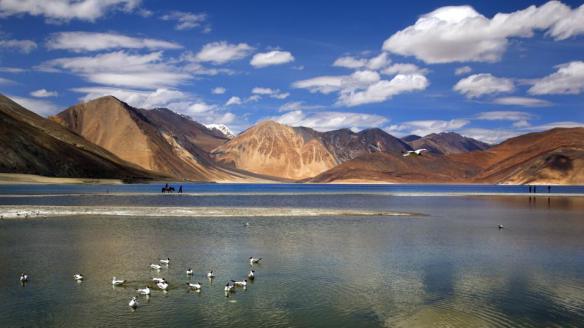 Tibet, a treasure-trove of natural resources, including water and precious metals, is a great strategic asset for China in its pursuit of an often-improvident style of economic growth. The sprawling Tibetan plateau also arms Beijing with water leverage over downstream countries because it is the starting point for most of Asia’s great rivers, many of which are being heavily dammed just before they cross into neighbouring nations.

China is sharpening its leverage with co-riparian India. Water indeed has emerged as a new divide in Sino-Indian relations, as Beijing quietly and opaquely builds dams, barrages and other structures on rivers flowing to India. It spurned then Prime Minister Manmohan Singh’s 2013 proposal that the two countries enter into a water treaty or establish an intergovernmental institution to define mutual rights and responsibilities on shared rivers. The flash floods that ravaged Himachal Pradesh and Arunachal Pradesh between 2000 and 2005 were linked to the unannounced releases from rain-swollen Chinese dams and barrages.

At a time when the Doklam face-off has entered its third month and the risk of a Chinese military attack on India is growing, there is more troubling news: Beijing is fashioning water into a political weapon by denying India flood-related hydrological data since May, even as major flooding has hit the region from Assam to Uttar Pradesh. Data on upstream river flows is essential for flood forecasting and warning in order to save lives and reduce material losses. China’s data denial crimps flash flood modelling in India.

By embarking on a dangerous game of water poker, Beijing has demonstrated how the denial of hydrological data in the critically important monsoon season amounts to the use of water as a political tool against a downstream country. Indeed, even while supplying data in past years, China’s lack of transparency raised questions. After all, like rice traded on the world market, hydrological data comes in different grades and qualities — from good, reliable data to inferior data and broken data.

China’s latest action actually violates two bilateral MOUs of 2013 and a 2014 accord, which obligate it to transfer hydrological data to India from three upstream monitoring stations in Tibet every year from May 15 to October 15. No data has been transferred thus far this year, although India, in keeping with the MOUs, paid for the data in advance. While China sells hydrological data to downriver countries, India provides such data free to both its downstream neighbours — Pakistan and Bangladesh.

China has long displayed contempt for international law. No bilateral accord seems to have binding force for it once its immediate purpose has passed, as Beijing recently highlighted by trashing the 1984 Sino-British treaty that paved the way for Hong Kong’s handover in 1997. China said that pact had lost “practical meaning” because 20 years had passed since Hong Kong’s return. Yet it selectively invokes a 19th-century, colonial-era accord to justify its Doklam intrusion, while ignoring its own violations — cited by Bhutan and India — of more recent bilateral agreements not to disturb the territorial status quo.

India should not be downplaying China’s breach of commitment to supply hydrological data from May 15. Yet, for two months, the ministry of external affairs hid China’s contravention, which began much before the Doklam standoff. When MEA finally admitted China’s breach of obligation, it simultaneously sought to shield Beijing by saying there could be a “technical reason” for non-transfer of data (just as MEA sought to obscure China’s Aug. 15 twin raids in the Lake Pangong area by gratuitously telling the Financial Times that “no commonly delineated boundary” exists there). How can a technical hitch explain data withholding from three separate stations for over two months? MEA also went out of its way to reject a linkage between China’s data denial and the flooding, for example, in Assam. Wouldn’t the timely transmission of data have generated flood warnings and thus helped save lives and movable assets?

Had China been in India’s place, it would have promptly raised a hue and cry about the commitment violation and linked it to the downstream floods and deaths.

More fundamentally, the Doklam standoff, the Chinese hydro-engineering projects to reengineer cross-border river flows, the denial of hydrological data, and China’s claims to vast tracts of Indian land are all a reminder that Tibet is at the heart of the India-China divide. The 1951 fall of Tibet represented the most far-reaching geopolitical development in modern India’s history, with the impact exacerbated by subsequent Indian blunders. India must subtly reopen Tibet as an outstanding issue, including by using historically more accurate expressions like “Indo-Tibetan border” (not “India-China border”) and emphasizing that its previously stated positions were linked to Tibet securing real autonomy.