TOKYO — When Japanese Prime Minister Shinzo Abe visited Tokyo’s controversial Yasukuni Shrine last month, Chinese leaders, predictably, condemned his decision to honor those behind “the war of aggression against China.” But Abe was also sending a message to Japan’s main ally and defender, the United States. Faced with US President Barack Obama’s reluctance to challenge China’s muscle-flexing and territorial ambition in Asia — reflected in Japan’s recent split with the US over China’s new Air Defense Identification Zone (ADIZ) — an increasingly desperate Abe was compelled to let both countries know that restraint cannot be one-sided.

For China and South Korea, the Yasukuni Shrine’s inclusion of 14 Class A war criminals who were executed after World War II has made it a potent symbol of Japan’s prewar militarism, and Abe long refrained from visiting it — including during his previous stint as prime minister. He may well have maintained that stance had China not established the ADIZ, which set an ominous new precedent by usurping international airspace over the East China Sea, including areas that China does not control. (Abe does not appear to have considered the possibility that his pilgrimage to Yasukuni might end up helping China by deepening South Korea’s antagonism toward Japan.) 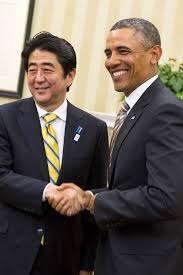 The Obama administration had been pressing Abe not to aggravate regional tensions by visiting Yasukuni — an entreaty reiterated by Vice President Joe Biden during a recent stopover in Tokyo on his way to Beijing. In fact, Biden’s tour deepened Japan’s security concerns, because it highlighted America’s focus on balancing its relationships in East Asia, even if that means tolerating an expansionist China as the strategic equivalent of an allied Japan.

Instead of postponing Biden’s trip to Beijing to demonstrate disapproval of China’s new ADIZ, the US advised its commercial airlines to respect it, whereas Japan asked its carriers to ignore China’s demand that they file their flight plans through the zone in advance. By calling for Japanese restraint, the US stoked Japan’s anxiety, without winning any concession from China.

Now, the widening rift between the US and Japan has become starkly apparent. Abe feels let down by Obama’s decision not to take a firm stand on the ADIZ — the latest in a series of aggressive moves by China to upend the status quo in the East China Sea. For its part, the US government openly — and uncharacteristically — criticized Abe’s Yasukuni visit, releasing a statement saying that it was “disappointed that Japan’s leadership has taken an action that will exacerbate tensions with Japan’s neighbors.”

Such recriminations do not mean that the US-Japan alliance — the bedrock of America’s forward military deployment in Asia — is in immediate jeopardy. Japan remains a model ally that hosts a large US troop presence, even paying for the upkeep of American forces on its soil — a generous contribution that surpasses the combined host-nation support of America’s 26 other allies, according to a Pentagon report. Indeed, Abe’s visit to Yasukuni came only a day after he completed a long-elusive, US-backed bilateral deal to relocate America’s air base in Okinawa to a less populous area of the island. And he supports Japan’s entry into the US-led Trans-Pacific Partnership, an emerging regional trading bloc that will exclude China.

Nonetheless, a psychological schism between the Abe and Obama administrations has gradually developed. While the US frets about Abe’s nationalistic stance vis-à-vis China and South Korea, Japanese officials have stopped trying to conceal their uneasiness over Obama’s effort to balance alliance commitments with closer Sino-American ties. Biden spent more than twice as much time in discussions with Chinese President Xi Jinping as he did with Abe.

The paradox is that while anxiety over China’s growing assertiveness has returned the US to the center of Asian geopolitics and enabled it to strengthen its security arrangements in the region, this has not led to action aimed at quelling China’s expansionary policies. As a result, Japan is becoming skeptical about America’s willingness to support it militarily in the event of a Chinese attack on the Japanese-controlled Senkaku Islands (Diaoyu Islands in China). The Obama administration’s contradictory rhetoric — affirming that the US-Japan security treaty covers the Senkakus, while refusing to take a position on the islands’ sovereignty — has not helped.

A wake-up call for Japan was Obama’s inaction in 2012, when China captured the Scarborough Shoal, part of the Philippines’ exclusive economic zone. In an effort to end a tense standoff, the US brokered a deal in which both countries agreed to withdraw their maritime vessels from the area. But, after the Philippines withdrew, China occupied the shoal — and, despite a mutual-defense treaty between the US and the Philippines, the US did little in response. This emboldened China effectively to seize a second Philippine-claimed shoal, part of the disputed Spratly Islands.

Factors like geographical distance and economic interdependence have made the US wary of entanglement in Asia’s territorial feuds. And, unlike Asian countries, America would not really suffer from a Chinese “Monroe Doctrine” declaring that China would not accept any outside intervention in Asia. But America’s neutrality on sovereignty disputes threatens to undermine its bilateral security alliances (which, by preventing countries like Japan from turning toward militarism, actually serve Chinese interests).

The Obama administration’s Asian balancing act obfuscates the broader test of power that China’s recent actions represent. What is at stake are not merely islands in the East and South China Seas, but a rules-based regional order, freedom of navigation of the seas and skies, access to maritime resources, and balanced power dynamics in Asia.

By fueling Japanese insecurity, US policy risks bringing about the very outcome — a return to militarism — that it aims to prevent.