The government-to-government weapon contracts between the U.S. and India, with no competitive bidding or transparency, are deepening India’s import dependency without arming it with a decisive edge.

The blossoming of ties with the United States has become an important diplomatic asset for India in recent years. Yet the heady glow of the much-ballyhooed strategic partnership helped obscure prickly issues that arose much before the Devyani Khobragade episode. In truth, the Obama administration’s reluctance to accommodate Indian interests on major issues, coupled with the fundamental challenge of managing an asymmetrical relationship, has created fault lines that are testing the resilience of the partnership. 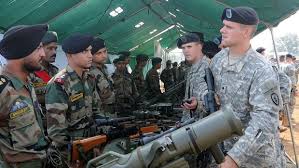 One aspect of the relationship, however, has thrived spectacularly — U.S. arms sales to India. In just a few years, the U.S. has quietly emerged as India’s largest arms supplier, leaving Russia and Israel far behind. This development is linked to the Indo-U.S. civilian nuclear deal. Although it remains a dud deal on energy, with little prospect of delivering a single operational nuclear power plant for years to come, it has proved a roaring success in opening the door to major U.S. arms sales. The 2005 nuclear agreement-in-principle incorporated a specific commitment to ramp up defence transactions.

The booming arms sales — rising in barely one decade from a measly $100 million to billions of dollars yearly — have seemingly acquired an independent momentum. Nothing better illustrates this than the fact that, at the height of the Khobragade affair, India, far from seeking to impose any costs on America, awarded it yet another mega-contract — a $1.01-billion deal for supply of six additional C-130J military transport aircraft. When Prime Minister Manmohan Singh visited the White House last September, among the gifts he took for President Barack Obama was a commitment to purchase $5 billion worth of new arms.

Today, India’s largely one-sided defence relationship with the U.S. is beginning to look akin to its lopsided ties with Russia, with weapon sales serving as the driving force. However, unlike the torpid Indo-Russian non-military commerce, the two-way Indo-U.S. trade has quadrupled in just seven years from $25 billion in 2006 to about $100 billion in 2013.

Let’s be clear: India can never emerge as a major international power in a true sense, or acquire a military edge regionally, if it remains dependent on imports to meet even its basic defence needs. The capacity to defend oneself with one’s own resources is the first test a nation must pass on the way to becoming a great power.

Ominously, a still-poor India has emerged as the world’s biggest arms importer since 2006, accounting for 10% of all weapons sold globally. Such large-scale imports might suggest that India is pursuing a well-planned military build-up. In truth, such imports lack strategic direction, given the absence of long-term political thinking and joint tri-service planning and command. They are being made in a haphazard manner, although any imported weapon makes India hostage to the supplier-nation for spares and service for the full life of that system.

The rising arms imports, far from making India secure, are only exposing new gaps in its capabilities to decisively win a war. The inveterate dependency burdens Indian taxpayers, forcing them to subsidize foreign military-industrial complexes. Worse still, defence transactions remain the single largest source of kickbacks for India’s corrupt and compromised political elites. This factor alone explains why India has failed to replicate in the conventional-arms sector its impressive indigenous achievements in the fields where imports are not possible — the space, missile and nuclear-weapons realms. Consider the glaring paradox: India surprised the world by launching a spacecraft to Mars, yet it still imports rifles.

For the U.S., displacing Russia as India’s largest arms supplier has been a diplomatic coup. Rarely before has America acquired a major arms client of such size so rapidly. The U.S.’s India success indeed parallels what happened in the early 1970s when Egypt switched sides during the Cold War, transforming itself from a Soviet arms client to becoming reliant on American arms supplies. The difference is that unlike the perpetually aid-dependent Egypt, India buys weapons with its own money.

With U.S. military spending slowing and other export markets remaining tight, American firms are eager to further expand arms sales to India. The fact that the U.S. now conducts more military exercises with India than with any other country creates a favourable political milieu for its defence firms to aggressively push their wares for sale. Even so, the troubling lack of competitive bidding or transparency in the arms deals — all clinched on a government-to-government basis — has become conspicuous. In the one case where India invited bids — to buy 126 fighter-jets — American firms failed to make it beyond the competition’s first round.

The annual value of India’s arms contracts to the U.S. already surpasses American military aid to any country other than Israel. Diplomacy, to be effective, must be backed by leverage and cross-linkages to minimize the weaker side’s disadvantages. Yet New Delhi has not tried to leverage its contracts either to persuade the U.S. to stop arming Pakistan against India or to secure better access to the American market for its highly competitive information-technology and pharmaceutical companies, which are facing new U.S. non-tariff barriers. India’s new frontier of dependency has emerged even as the U.S. bolsters Pakistan with generous military aid.

To be sure, the U.S. signed a four-point declaration of intent with India last September to move beyond the sale of complete weapon systems to co-production through technology transfer. Translating that intent into practice won’t be easy, though. According to the joint declaration, efforts to identify specific opportunities for collaborative weapon-related projects will be pursued in accordance with “national policies and procedures.” But if U.S. policies and procedures do not evolve in the direction of facilitating such collaboration, the declared intent will remain little more than pious hope.

The declaration clearly sought to pander to India’s desire for a less inequitable defence relationship. By dangling the carrot of India being upgraded to the same level as America’s “closest partners,” the declaration also peddled a catchy slogan excitedly lapped up by the Indian media. The U.S. is now willing to co-produce some smaller defensive systems with India, such as the Javelin anti-tank missiles. Such restricted technology transfers, the U.S. believes, will pave the way for securing additional multibillion-dollar contracts to sell large readymade weapons to India.

Significantly, U.S. arms to India fall mainly in the category of defensive weapons. Russia, by contrast, has transferred offensive weapon systems to India, including strategic bombers, an aircraft carrier, and a nuclear-powered submarine. Will the U.S. be willing to sell high-precision conventional arms, anti-submarine warfare systems, long range air- and sea-launched cruise missiles, and other conventional counterforce systems that could tilt the regional military balance in India’s favour?

Another issue relates to the strategic benefits from a closer defence relationship. True, such a relationship will have a countervailing value vis-à-vis China. Yet, it is also true that America has a deeper engagement with China than with India. Indeed, China is now central to U.S. economic and strategic interests. This fact helps to explain why the Obama administration has chartered a course of neutrality on territorial disputes between China and its neighbours, shying away from holding even joint military exercises in Arunachal Pradesh.

A wake-up call for Asian states that rely on the U.S. as their security guarantor was Obama’s inaction on the 2012 Chinese capture of the Scarborough Shoal, located within the Philippines’ exclusive economic zone. America’s indifference to its commitment to the Philippines under their Mutual Defence Treaty emboldened China to effectively seize a second Philippine-claimed shoal. This is proof that despite its “pivot” toward Asia, the U.S. won’t act in ways detrimental to its close engagement with China. Obama’s foreign policy bears a distinct transactional imprint.

A wise India would consider declaring a moratorium on arms purchases from all sources to give itself time to strategize its priorities and clean up its procurement system. A moratorium of just three years will save the country a whopping $20 billion without compromising national security. With non-traditional threats — ranging from asymmetric warfare in the form of cross-border terrorism to territorial creep through furtive encroachments — now dominating India’s security calculus, procurement of more mega-weapons to meet traditional security challenges must wait until the nation has added strategic direction to its defence policy.