While downplaying territorial losses, New Delhi is modernizing its military

Tawang, in the northeastern Indian state of Arunachal Pradesh, in October 2006: The latest clashes were sparked by a Chinese attempt to seize mountaintop positions near the town. © AP

The latest border clash between Chinese and Indian troops on Dec. 9 took place nearly 2,000 kilometers from the sites of previous skirmishes. This underscores the enduring costs of Beijing’s stealthy land grabs along India’s borderlands and how much those encroachments have spurred military buildups and tensions along the two nations’ entire long Himalayan frontier.

When asked to comment on the fighting four days after this month’s clash, a Chinese Foreign Ministry spokesman said: “As far as we know, the China-India border areas are generally stable. The two sides have maintained smooth communication on boundary-related issues through diplomatic and military channels.”

This is in keeping with a strategy described in the U.S. Department of Defense’s annual China military report, which stated that Beijing has “sought to downplay the severity of the crisis … to prevent the standoff from harming other areas of its bilateral relationship with India.”

Through its aggressive revisionism, however, China has set in motion forces that are likely to come back to haunt its own long-term interests.

Its increasingly muscular approach and border provocations are beginning to shake India out of its complacency and trigger much-needed modernizations of the country’s military, including major investments in counterintervention capabilities, greater missile power and formation of additional mountain-warfare forces.

Yet in the short term, China’s efforts to silo the border crisis are showing some signs of success.

For example, China’s large trade surplus with India has continued to surge since the military confrontation began in May 2020 when Indian troops discovered the incursions by the Chinese military.

Indeed, India’s trade deficit with China is now the world’s third-largest such imbalance and has even overtaken New Delhi’s 5.25 trillion rupee ($63.45 billion) defense budget in size. After reaching $77 billion in the Indian financial year that ended in March, the bilateral deficit is projected to cross $88 billion this fiscal year.

In effect, India is underwriting Beijing’s economic and military power even as its forces seek to contain creeping Chinese expansionism.

The latest clashes were sparked by a Chinese attempt to seize mountaintop positions in Tawang, the birthplace of a previous Dalai Lama and a district of the state of Arunachal Pradesh, which Beijing has been calling “South Tibet” since 2006. Tawang controls access to Bhutan’s Sakteng Wildlife Sanctuary, which China has claimed since mid-2020.

By playing down the military confrontation, Beijing has been able to maintain the veneer of stable diplomatic relations with India. This was underscored by smiling pictures of Chinese President Xi Jinping interacting with Prime Minister Narendra Modi during the recent Group of 20 summit in Bali, although the two did not hold a private meeting, as each did with other leaders.

Xi’s larger objective is to avoid driving New Delhi closer to Washington and making a U.S.-India strategic alliance a reality.

Yet Beijing’s aggression has prodded New Delhi into concluding the last of four foundational defense-related agreements that Washington regularly puts in place with military allies and has also breathed new life into the Quad arrangement with Washington, Canberra and Tokyo, with India’s annual Malabar war games now including all three partners.

For New Delhi, soft-pedaling Chinese border aggression is a way to save face. Modi, while openly challenging China’s capability and power by resolutely sustaining the military standoff, does not want to draw public attention to Beijing’s territorial grabs, as they took his government by complete surprise.

Indeed, Modi has made no comment on the land grabs. His government last week thwarted a discussion in parliament on the latest border clash, telling lawmakers to be content with a brief statement from the defense minister.

India failed to foresee the territorial losses largely because Modi had been focused on befriending Beijing to chip away at the China-Pakistan axis. As part of that effort, Modi met with Xi 18 times over the five years before the 2020 encroachments and missed warning signs, including Chinese combat exercises and frenzied military-infrastructure construction along the two nations’ frontier.

As an old adage goes, those who fail to learn from history are doomed to repeat it. The dogged courtship of Mao Zedong by Jawaharlal Nehru, India’s first post-independence prime minister, helped create New Delhi’s China problem. On Nehru’s watch, China annexed buffer state Tibet to impose itself as India’s neighbor and then began encroaching on Indian territories before launching a border war in the Himalayas in 1962. 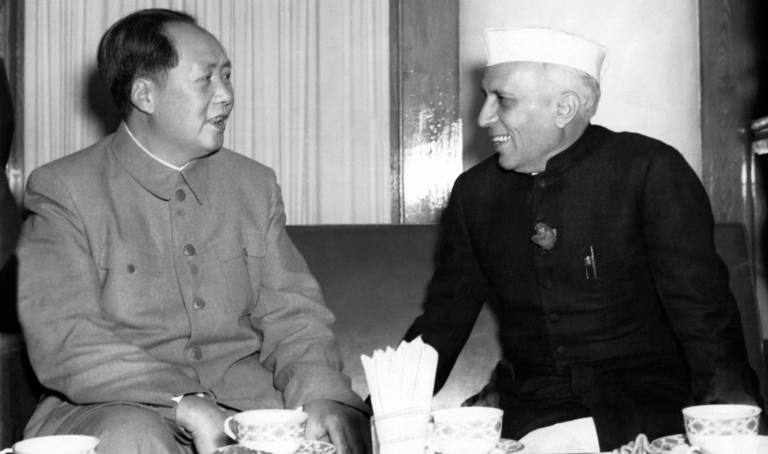 Mao Zedong and Jawaharlal Nehru talk over a cup of tea in Beijing in October 1954: The dogged courtship of Mao by Nehru helped create New Delhi’s China problem. © Gamma-Rapho/Getty Images

Today, China may have reason to gloat over what it calls “recovery momentum” in ties with India. Far from launching a diplomatic offensive to spotlight Chinese aggression, New Delhi remains reticent about naming and shaming Beijing even as its rival has spotlighted issues involving Kashmir at the U.N. Security Council.

The Modi administration, in fact, still uses euphemisms to describe the Himalayan crisis, or what it calls a “unilateral change of status quo” involving “friction points” that should be resolved by the “full restoration of peace and tranquility.”

New Delhi has also shied away from imposing meaningful costs on Beijing, including by exercising its trade leverage. While New Delhi has banned numerous Chinese mobile phone apps, restricted Chinese companies’ access to Indian government contracts and launched tax and customs probes against Chinese phone makers, this has been no more than an annoyance for Beijing.

Deterrence, to be effective, must extend beyond military strength to the use of all available tools.

More fundamentally, why should salami-slicing be the prerogative of only the Chinese side? Why does India not pay China back in the same coin?

India’s overly defensive, risk-averse approach, including a reluctance to impose costs, is aiding China’s strategy of having its cake and eating it too.

Xi has picked a border fight with India that China cannot win. While the Chinese military relies heavily on conscripts, India, with an all-volunteer force, has the world’s most-experienced troops for hybrid mountain warfare. A war between these two nuclear-armed giants would likely end in a bloody stalemate.

Brahma Chellaney is professor emeritus of strategic studies at the Center for Policy Research in New Delhi and a former adviser to India’s National Security Council. He is the author of nine books, including “Water: Asia’s New Battleground.”