Undermining its relationship with New Delhi will cost the U.S. dearly

U.S. President Joe Biden’s concerted effort to cajole nations into joining the American-led coalition against Russia recalls the famous words of the legendary anti-apartheid leader Nelson Mandela, who said the grievous mistake some Westerners make is to insist that “their enemies should be our enemies.”

In the conflict between the West and Moscow over Russia’s invasion of Ukraine, much of the non-Western world has declined to take sides. So why has Biden especially bristled at India’s independent stance when the world’s major non-Western democracies — from Brazil and Mexico to South Africa and Indonesia — have all chartered a course of neutrality?

Because India is the world’s largest democracy, its neutrality undermines Biden’s narrative that the conflict symbolizes a “battle between democracy and autocracy, between liberty and repression, between a rules-based order and one governed by brute force.” Never mind that Ukrainian President Volodymyr Zelenskyy’s regime is no less autocratic than Russian President Vladimir Putin’s.

The fact is that whichever side the U.S. has armed over the decades was invariably portrayed by it as “fighting for freedom” — from the anti-Soviet Islamist guerrillas in Afghanistan from whom al-Qaida and the Taliban evolved, to Syria’s anti-Bashar Assad jihadists who gave rise to ISIS. Biden’s “new battle for freedom,” as he calls it, has led to increasingly sophisticated Western weapons pouring into Ukraine, with the U.S. also supplying battlefield intelligence, including targeting data.

Here’s the paradox: While seeking to co-opt New Delhi in his new Cold War with Moscow, Biden has still not uttered a single word on China’s two-year-long border aggression against India, which has triggered the largest Himalayan buildup of rival forces in history. In keeping with Biden’s outreach to Beijing, his State Department, equating the victim with the aggressor, has urged India and China to find “a peaceful resolution of the border disputes.”

India holds more annual military exercises with America, its largest trading partner and an increasingly important strategic partner, than any other country. U.S. arms sales to India went from near zero in 2008 to over $20 billion in 2020. India’s almost $150-billion goods and services trade with the U.S. dwarfs New Delhi’s $12.8 billion trade with Russia, its largest defense partner. 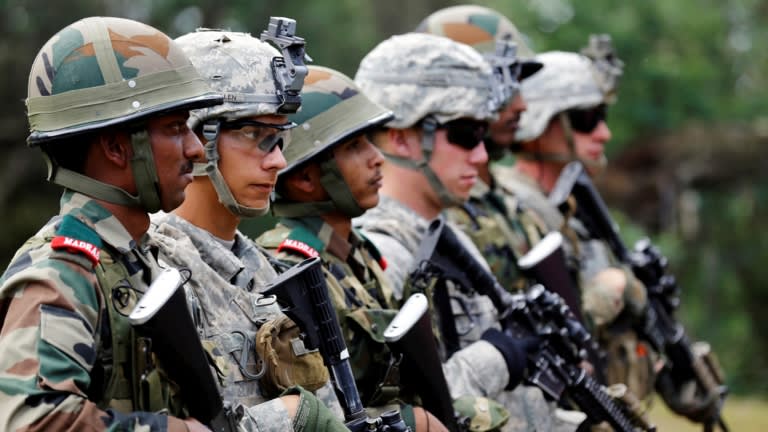 Indian and U.S. soldiers take part in a joint combat exercise in Ranikhet, India, in September 2016: India holds more annual military exercises with America than any other country.   © Reuters

Team Biden’s growing warnings to countries intent on sitting out the new Cold War to pick a side or face economic consequences could undermine the blossoming partnership with India, which stayed neutral even when the U.S. and its allies invaded Iraq or waged regime-change war in Libya. Biden’s top economic adviser, Brian Deese, touched a raw nerve in India when he threatened that “the costs and consequences” for it would be “significant and long-term.”

However, the more positive tone emanating from Washington following the latest U.S.-India discussions suggests that the White House may have secured an Indian assurance on “sanctions compliance,” as an American background briefer phrased it.

On April 11, Biden held an hourlong virtual discussion with Prime Minister Narendra Modi as a prelude to the “two-plus-two” discussions that Defense Secretary Lloyd Austin and Secretary of State Anthony Blinken jointly had with the visiting Indian defense and foreign ministers.

The U.S. used its Iran sanctions to deprive India of cheaper oil and turn it into the world’s largest importer of American energy. The main beneficiary of those sanctions has been India’s rival, China, which, without facing American reprisals, has been buying Iranian oil at a hefty discount, besides becoming Iran’s security partner and top investor.

Now Washington seems intent on employing its Russia sanctions to downgrade Indian defense ties with Moscow, with Austin calling on India to cut defense transactions with Russia and turn to America for all its military requirements. Indeed, Deputy Secretary of State Wendy Sherman told Congress that the U.S. sees “a great opportunity” for defense sales to India to “surge.”

Energy purchases and payments are exempt from America’s Russia sanctions. Yet, as if heeding Biden’s call to India not to accelerate or increase imports of heavily discounted Russian oil, the state-run Indian Oil Corporation, the country’s leading refiner, recently dropped Russia’s flagship Urals crude from its newest tender. And Indian Foreign Minister S. Jaishankar, by saying that “we won’t be in the top 10” buyers of Russian oil, has signaled that India will not significantly go beyond its traditionally modest imports of Russian energy.

Still, Biden is not easing pressure on India. While appeasing communist China, his administration is paradoxically trying to employ human-rights issues as leverage against India. After the two-plus-two discussions, Blinken took a swipe at India, alleging “a rise in human rights abuses.” But barely nine months earlier, Blinken had sung a different tune, saying “both of our democracies are works in progress.”

These are challenging times for U.S.-India relations. Undermining what should be America’s most important strategic partnership in Asia makes little strategic sense, especially if the U.S. wishes to genuinely pivot to the Indo-Pacific.

India’s neighborhood is already troubled, with a crisis-torn Sri Lanka suspending foreign debt payments and mounting Chinese repression triggering fresh self-immolations in Tibet. Yet, Biden surrendered Afghanistan to the Taliban terrorists, thereby strengthening Pakistan at India’s expense. And he is pushing military-ruled Myanmar into China’s arms with his sanctions policy.

Biden’s overriding focus on punishing Russia threatens to exacerbate India’s regional-security challenges, especially by aiding the further rise of an expansionist China. The U.S.-led sanctions will effectively put Russia, the world’s richest country in natural resources, in the pocket of a resource-hungry China.

The main brunt of the rise of a more powerful and aggressive China will be borne by its neighbors, especially India. Unlike Japan and Australia, which are under the U.S. security and nuclear umbrella, India must deal with China on its own, as the current Himalayan military crisis shows.