The 30th anniversary of the Tiananmen Square massacre is a reminder that the free ride China has enjoyed internationally in recent decades is ending. It should also serve as a warning to the Communist Party that its continued reliance on brute power to keep China’s citizens in line could eventually leave it on the ash heap of history. 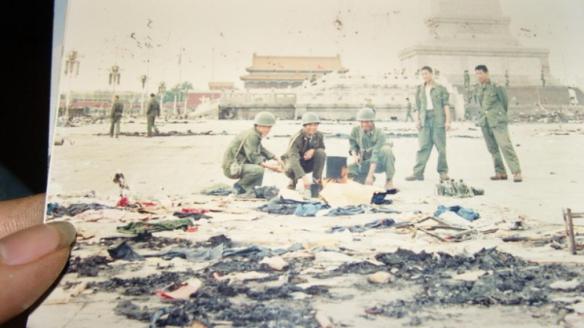 Tiananmen Square just after the massacre on the night of June 3-4, 1989.

The 30th anniversary of the Tiananmen Square massacre of at least 10,000 people is significant for several reasons. For one thing, the deadly assault on student-led demonstrators remains a dark and hidden chapter in China’s communist narrative. For another, the Chinese government’s arbitrary exercise of power against its own citizens has not only continued since the massacre, but has become more methodical, sophisticated, and efficient, with the country’s internal-security budget now officially surpassing its mammoth defense spending. Yet at the same time, this reliance on brute force carries an ominous message for the Communist Party of China (CPC) itself.

In a night of carnage on June 3-4, 1989, the Chinese authorities crushed the pro-democracy protests with tanks and machine guns. In Eastern Europe, the democratization push led to the fall of the Berlin Wall just five months later, heralding the end of the Cold War. But the West recoiled from sustaining its post-Tiananmen sanctions against China, thereby paving the way for the country’s dramatic rise.

The West not only glossed over the massacre, but also ignored China’s subsequent excesses and unfair trade practices. US President Donald Trump recently lamented how the United States had aided China’s rise and spawned a “monster”: “[China] took advantage of us for many, many years. And I blame us, I don’t blame them,” Trump said. “I don’t blame [Chinese] President Xi [Jinping]. I blame all of our presidents, and not just President [Barack] Obama. You go back a long way. You look at President [Bill] Clinton, [George W.] Bush – everybody; they allowed this to happen, they created a monster.”

Yet, after a long post-massacre boom, China – the world’s largest, strongest, wealthiest, and most technologically advanced autocracy – is entering a period of uncertainty just as it prepares to celebrate a record 70 years of communist rule. (The longest-lasting autocratic system in the modern era, the Soviet Union, survived 69 years.)

China’s many anniversaries in 2019 are making this a politically sensitive year. The Tiananmen Square protests in 1989 were inspired by the watershed May 4, 1919, student demonstrations against Western colonialism at the same site. But whereas Xi recently extolled the May Fourth Movement in a speech marking the centenary of that event, he and the CPC are edgy about the Tiananmen anniversary.

This year also marks the 60th anniversary of a failed uprising in Tibet against Chinese occupation. And it is ten years since a Uighur revolt killed hundreds in the Xinjiang region, where more than one million Muslims have now been incarcerated as part of a Xi-initiated effort to “cleanse” their minds of extremist thoughts. Then, on October 1, the People’s Republic of China will celebrate its 70th birthday.

But the anniversary of the 1989 Tiananmen crackdown is the most portentous for the CPC’s continued monopoly on power. The massacre was carried out because the party has relied on brute force since its inception, including to seize power. During the rule of the PRC’s founder, Mao Zedong, tens of millions died in the so-called Great Leap Forward, the Cultural Revolution, and other state-engineered disasters.

Adolf Hitler was responsible for an estimated 11-12 million civilian deaths, and Joseph Stalin for at least six million. But Mao, with some 42.5 million, was the undisputed champion butcher of the twentieth century. And his blood-soaked rule influenced his successor, Deng Xiaoping, who ordered the savage assault on the Tiananmen demonstrators.

The CPC’s survival in power reflects not only its willingness to deploy massive violence, but also its skill at distorting reality with propaganda and snuffing out dissent. But how long can the world’s oldest autocracy continue to sustain itself? By dispensing with collective leadership and orderly succession, Xi has already undermined the institutionalism that made post-Mao China resilient to the forces of change that helped to unravel the Soviet empire.

Until Xi’s lurch to despotism, it seemed that history was by and large going China’s way. Its economy was booming, its control of the South China Sea was steadily expanding, and its Belt and Road Initiative (BRI) of transnational infrastructure projects was progressing smoothly. But China is now facing strong international headwinds at a time when its economy has noticeably slowed. BRI partner countries are increasingly concerned about becoming ensnared in sovereignty-eroding debt traps. China’s influence operations in democratic countries – and the Trojan horse of Confucius Institutes at foreign universities – are now meeting increased resistance. And, more fundamentally, the paradigm shift in US policy toward China under Trump is altering the geopolitical landscape for Xi’s government.

Meanwhile, China’s growing economic risks – such as rising local government debt, higher US trade tariffs, and Western pushback against its technological expansion and trade and investment practices – are compounding the CPC’s concerns about social unrest. By prompting some multinationals to move production from China to Vietnam, Malaysia, Indonesia, and elsewhere, Trump’s tariffs are further intensifying the party’s anxiety.

As a result, China’s triumphalism has ceased, and Xi has warned that the country faces major new risks at home and abroad that could escalate and ignite turbulence. The CPC fears that it could meet the same fate as its Soviet counterpart, especially if it fails to prevent small incidents from spiraling into major defiance of its authority. This explains Xi’s emphasis on enforcing strict Leninist discipline. Yet Xi himself is undermining the CPC by building a cult of personality around his one-man rule and by inviting international pushback through his overemphasis on China’s strength and power.

The anniversary of the Tiananmen Square massacre is a reminder that the free ride China has enjoyed internationally over the past 30 years is ending. It should also serve as a warning to the CPC that its continued reliance on brute power to keep China’s citizens in line could eventually leave it on the ash heap of history.