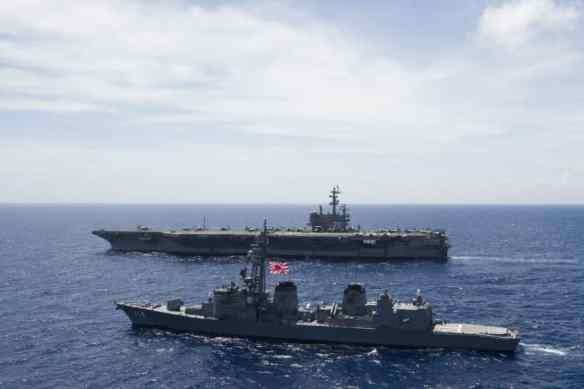 How can the United States succeed in establishing a truly “free and open” Indo-Pacific when the region’s most-important corridor — the South China Sea — has come under China’s de facto control and is thus neither free nor open?

The Indo-Pacific is emerging as the center of global power and wealth, with security dynamics changing rapidly in the region. The contest for regional influence pits America’s new strategy for a “free and open Indo-Pacific” (FOIP) — a concept authored by Japanese Prime Minister Shinzo Abe — against China’s “Belt and Road” initiative (BRI), which U.S. Vice President Mike Pence last weekend mocked as a “constricting belt” and a “one-way road.”

As speculation grows that the deep-water commercial port China is building at Koh Kong in Cambodia could become dual-purpose docks, just as Pakistan’s Chinese-controlled Gwadar port has acquired a strategic dimension, Pence at the APEC summit announced that the United States will partner with its ally Australia to build a naval base on Papua New Guinea’s Manus Island.

Japan and India have reason to try and improve strained ties with China. But as China has come under greater U.S. pressure on trade, technology and other fronts, it has sought to ease tensions with its geopolitical rivals, Japan and India. Pence cited Xi’s outreach to Japan as one sign “China got the message” about Washington’s new position.

Indeed, in response to the mounting American pressure, Xi this month emphasized his personal relationship with U.S. President Donald Trump and called for “a plan that both can accept.” In recent days, Xi’s government has even submitted a list of concessions that Trump has rebuffed as inadequate.

This shows how active American pressure, as opposed to mere admonitions, can result in improving China’s behavior. When a nation pursues an accommodating approach toward Beijing, an emboldened China ups the ante. But while deference usually invites bullying, standing up to China draws respect and a readiness to negotiate and make concessions.

At the heart of the changing U.S. policy on China are two key priorities — ending its trade-distorting policies and developing the new Indo-Pacific strategy through the FOIP concept.

Trump’s predecessor, Barack Obama, attempted to “pivot’ to Asia. The pivot, unveiled in 2011, attracted a lot of international attention but had little impact in shaping the regional geostrategic landscape.

For example, it did nothing to tame China’s territorial and maritime revisionism. In fact, it was on Obama’s watch, after he had unveiled the pivot, that China created and militarized islands in the South China Sea, thereby fundamentally transforming the situation there. North Korea, for its part, made rapid nuclear and missile advances.

With Obama’s attention diverted by developments in the Middle East and Russia’s takeover of Crimea, his pivot to Asia got lost somewhere in the arc between the Syria-Iraq belt and Ukraine.

Of course, under his pivot policy, the shift of more U.S forces to the Asia-Pacific gained momentum, along with a focus on investing in high-end capabilities with relevance to the Indo-Pacific, including electronic warfare, cyber and space. But Obama’s pivot policy never acquired a clear vision, and critics contended that it merely repackaged some policies initiated by Obama’s predecessor, George W. Bush.

Against this background, the Trump administration’s FOIP strategy, with its clearer vision and objectives, looks like the true pivot to Asia. This is largely because of the paradigm shift underway in America’s China policy.

The ongoing shift in China policy has spawned the FOIP strategy, which extends to the Indian Ocean — the new geostrategic focus of China, after its success in changing the South China Sea status quo in its favor. The FOIP strategy’s economic and security objectives are clearly being influenced by the evolving China-policy shift.

The real architect of the FOIP concept, however, is Abe, who unveiled that idea in mid-2016 in Nairobi. The term, “Indo-Pacific,” of course, has been in use since the 1990s. And the Obama administration publicly embraced the Indo-Pacific term so as to factor in the emerging strategic realities in the Indian Ocean region, which traditionally was not considered part of the Asia-Pacific. But it was Abe who, by prefixing the words “free and open” to Indo-Pacific, devised the concept that is now shaping Washington’s strategic reorientation.

U.S. foreign policy traditionally has not embraced a concept authored by a foreign leader. The U.S. adoption of the FOIP concept is a rare exception.

Washington’s Indo-Pacific strategy, however, faces some tough challenges, not least because of the hedging policies of some U.S. allies. Caught between an unpredictable and transactional Trump administration and an arrogant and pushy China, some U.S. friends find themselves between a rock and a hard place.

Moreover, some U.S. allies, including Australia and South Korea, view their economic relations with China to be as important as their security ties with the U.S. The last thing they want is for American policy to force them to choose between the U.S. and China. America’s own neutrality on disputes between China and its neighbors, including in the South and East China seas and the Himalayas, encourages its friends to hedge their bets.

Another challenge for Washington relates specifically to the South China Sea, a highly strategic corridor connecting the Indian and Pacific oceans. How can the Indo-Pacific be “free” and “open” when its most-important sea corridor is neither free nor open?

The Trump administration, to be sure, has stepped-up freedom-of-navigation operations in the South China Sea. But let’s be clear: Such operations neither credibly deter China nor reassure America’s regional allies.

Without a clear plan to deal with the changing status quo there, the South China Sea will remain a critical missing link in Washington’s larger Indo-Pacific strategy.

Meanwhile, the Australia-India-Japan-U.S. “Quad,” despite the hype, has yet to live up to its promise. Abe, incidentally, is also the author of the idea to create a club of the four leading Indo-Pacific democracies. The Quad’s origins date back to Abe’s initial 2006-2007 stint as prime minister, when he received active support from then U.S. Vice President Dick Cheney. Thanks to Abe’s push, the Quad evolved out of the U.S.-India-Japan-Australia “regional core group” that U.S. President George W. Bush announced to deal with the December 2004 Indian Ocean tsunami disaster.

Since the Quad was revived a year ago, its member-states have met at the level of senior bureaucrats, including for the third time last week in Singapore. But no ministerial-level meeting has been held thus far. This may explain why the Quad’s institutionalization has yet to take off.

Quad members must start coordinating their approaches to effectively create a single regional strategy. And they need to build broader collaboration with other important players in the Indo-Pacific, as well as with strategically located small countries.

More fundamentally, progress on building a rules-based Indo-Pacific order is linked to addressing the regional imperative for strategic equilibrium, a goal at the core of Abe’s foreign policy. Playing by international rules and not seeking to redraw borders by force are central to peace and security.

Longtime Japan Times contributor Brahma Chellaney is a geostrategist and the author of nine books, including the award-winning “Water: Asia’s New Battleground.”