Trump may well launch his own ‘Asian pivot’ in the vacuum of Obama’s lackluster effort. 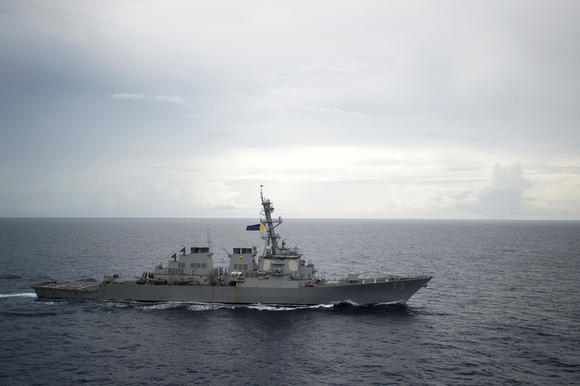 U.S. President Barack Obama’s strategic “pivot” toward Asia, unveiled in 2012, attracted much international attention but did little to tame China’s muscular approach to territorial, maritime and trade disputes. Indeed, with the United States focused on the Islamic world, Obama’s much-touted Asian pivot seemed to lose its way somewhere in the arc between Iraq and Libya. Will President-elect Donald Trump’s approach to Asia be different?

In his first meeting with a foreign leader since his surprise Nov. 8 election triumph, Trump delivered a reassuring message to Japanese Prime Minister Shinzo Abe who, in turn, described him as a “trustworthy leader.” In a smart diplomatic move, Abe made a special stop in New York on Nov. 17, en route to the Asia-Pacific Economic Cooperation summit in Peru, to meet face-to-face with Trump, who shares his conservative, nationalistic outlook.

Today, Asia faces the specter of power disequilibrium. Concern that Trump could undo Obama’s pivot to Asia by exhibiting an isolationist streak ignores the fact that the pivot has remained more rhetorical than real. Even as Obama prepares to leave office, the pivot — rebranded as “rebalancing” — has not acquired any concrete strategic content.

If anything, the coining of a catchy term, “pivot,” has helped obscure the key challenge confronting the U.S.: To remain the principal security anchor in Asia in the face of a relentless push by a revisionist China to expand its frontiers and sphere of influence.

Trump indeed could face an early test of will from a China determined to pursue its “salami slicing” approach to gaining regional dominance. In contrast to Russia’s preference for full-fledged invasion, China has perfected the art of creeping, covert warfare through which it seeks to take one “slice” of territory at a time, by force.

With Obama having increasingly ceded ground to China in Asia during his tenure, Beijing feels emboldened, as evident in its incremental expansionism in the South China Sea and its dual Silk Road projects under the “One Belt, One Road” initiative. The Maritime Silk Road is just a new name for Beijing’s “string of pearls” strategy, aimed at increasing its influence in the Indian Ocean. Meanwhile, without incurring any international costs, China aggressively continues to push its borders far out into international waters in a way that no other power has done.

Indeed, boosting naval prowess and projecting power far from its shores are at the center of China’s ambition to fashion a strongly Sino-centric Asia. Boasting one of the world’s fastest-growing undersea fleets, China announced earlier in November that its first aircraft carrier, the Liaoning, is ready for combat. Such revanchist moves will inevitably test the new U.S. administration’s limits.

In this light, it is difficult to see how Trump can afford to cut back on U.S. military deployments and assets in the Asia-Pacific region. What seems more likely is that Trump will live up to his election campaign promise to invest greater resources in the military. By relaxing some of the Obama-era constraints, Trump, in keeping with his “tough guy” image, could permit the U.S. navy and air force to initiate more aggressive reconnaissance and freedom-of-navigation operations in the South China Sea. He could also invite China’s wrath by getting Japan to join U.S. air and sea patrols in the disputed waters.

Trump is also expected to be more assertive diplomatically than Obama, who refused to speak up even when China occupied the Scarborough Shoal, located well within the Philippines’ exclusive economic zone. The 2012 takeover occurred despite a U.S.-brokered deal under which both Beijing and Manila agreed to withdraw their vessels from the area. Yet the U.S. did nothing in response to China’s move, despite its mutual-defense treaty with the Philippines. That inaction helped spur China’s frenzied creation of artificial islands in the South China Sea.

In late 2013, when China unilaterally declared an air defense identification zone covering territories it claims but does not control in the East China Sea, Obama again hesitated. Indeed, Washington, far from postponing Vice President Joe Biden’s trip to Beijing to express disapproval of the Chinese action, advised U.S. commercial airlines to respect the ADIZ — an action that ran counter to Japan’s advice to its carriers to ignore China’s demand for advance notice of flight plans through the zone. In effect, the U.S. condoned China’s move to establish the ADIZ.

Philippine President Rodrigo Duterte’s much-criticized action to cut his own deal with China, involving billions of dollars in Chinese investment pledges, should be seen in this context. The deal, however, is likely to hold only until the next major Chinese incursion.

The paradox here is that Beijing’s rising assertiveness helped the U.S. return to Asia’s center-stage — yet, even as China became more aggressive with its neighbors, the Obama administration dithered over how to rein in such expansionism or reassure America’s jittery Asian allies. In fact, the more assertive China has become in pressing its territorial and maritime claims, from the East China Sea to the Himalayas, the more reluctant the Obama administration has been to take sides in Asia’s territorial disputes — although they center on Beijing’s efforts to change the status quo with America’s strategic allies or partners.

No less significant is Obama’s failure to provide strategic heft to his Asia pivot. By studiously avoiding disputes with China while working to balance America’s relationships with key Asian states, his administration shied away from tough strategic choices. Indeed, no sooner had the pivot policy been unveiled than a course correction was effected, with the administration tamping down the pivot’s military aspects and laying emphasis instead on greater U.S. economic engagement with Asia. Even the modest measure to permanently rotate up to 2,500 U.S. marines through Darwin, Australia, is yet to be fully implemented.

To countries bearing the brunt of China’s recidivist policies, this lack of clarity has not only raised doubts about the U.S. commitment, but also left them effectively at the mercy of a regional predator. That, in turn, has forced several of them to tread with excessive caution around Chinese concerns and interests.

Far from retreating from Asia, the U.S. under Trump is likely to bolster alliances and partnerships with states around China’s periphery. His administration may even support constitutional and national security reforms in Japan, on the assumption that a Japan that does more for its own defense will help to forestall the emergence of a destabilizing power imbalance in East Asia. Such support will also fit well with Trump’s top priority to halt the erosion of America’s relative power through comprehensive domestic renewal, including reining in the mounting U.S. budget deficit.

Trump’s election, however, has dimmed prospects for full implementation of the 12-nation, Trans-Pacific Partnership trade agreement. The TPP, which excludes not only China but also America’s close friends like India and South Korea, has been presented by Obama as the most important component of his unhinged pivot to Asia. In truth, the TPP is hardly a transformative initiative: With half its members already boasting bilateral free trade agreements with Washington, the TPP’s main effect would have been to create a free trade agreement between Japan and the U.S., which together account for about 80% of the gross domestic product of TPP signatories.

Trade is one area where Trump must deliver on his campaign promises or risk losing his credibility with the blue-collar constituency that helped propel him to victory. His administration not only will seek to renegotiate parts of the TPP — to the discomfit of Abe, who has made the trade deal a pillar of his economic reforms — but also is unlikely to give China a free pass on its trade manipulation. For this and many other reasons, U.S.-China ties could be in for a rough patch.

At a time when the very future of the Asian order looks uncertain, Trump could pivot to Asia in a way Obama did not. But today, no single power, not even the U.S., can shape developments on its own in Asia, including ensuring a rules-based order. His administration will have to work closely with likeminded states — from Japan and Australia to India and Vietnam — to build a stable balance of power in Asia.

Brahma Chellaney is a geostrategist and the author of nine books, including “Water, Peace, and War” (Rowman & Littlefield).