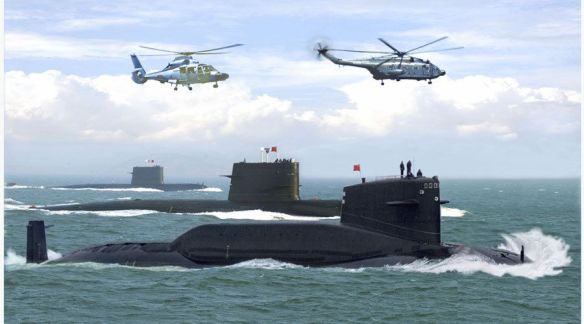 China’s recent acknowledgement that it is establishing its first overseas military base in the Indian Ocean rim nation of Djibouti, located on the Horn of Africa, represents a transformative moment in its quest for supremacy at sea. With Chinese submarines now making regular forays into India’s maritime backyard right under the nose of its Andaman & Nicobar Command, New Delhi must now face up to a new threat from the south.

China’s growing interest in the Indian Ocean — the bridge between Asia and Europe — draws strength from its aggressive push for dominance in the adjacent South China Sea. Without incurring any international costs, it belligerently continues to push its borders far out into international waters in a way that no power has done before. Its modus operandi to extend its frontiers in the South China Sea involves creating artificial islands and claiming sovereignty over them and their surrounding waters. In just a little over two years, it has built seven islands in its attempt to annex a strategically crucial corridor through which half of the world’s annual merchant fleet tonnage passes.

For India, still grappling to deal with the trans-Himalayan threat following China’s gobbling up of buffer Tibet, the rise of a Chinese oceanic threat signifies a transformative change in its security calculus. By building military facilities on disputed Spratly and Paracel islands, China is positioning itself at the mouth of the Indian Ocean. A Beijing-based defence website, Sina Military Network, last year claimed, even if implausibly, that 10 Chinese attack submarines could blockade India’s eastern and western coastlines.

Make no mistake: China’s rapidly growing submarine fleet is suited not for Southeast Asia’s shallow sea basin but for the Indian Ocean’s deep, warm waters. This explains why China is setting up a naval hub in Djibouti, building a naval base at Gwadar, and wanting access to port facilities around India, like it has secured in Sri Lanka. China’s consolidation of power in the South China Sea will have a direct bearing on India’s interests in its own maritime backyard.

With New Delhi slow to add teeth to its Andaman & Nicobar Command, Beijing is assiduously chipping away at India’s natural-geographic advantage. The longer term strategic risk for India is that China, in partnership with its close ally Pakistan, could encircle it on land and at sea. After covertly transferring nuclear-weapon, missile and, most recently, drone technologies to Pakistan, China has publicized a deal to more than double the size of that country’s submarine force by selling eight subs to it.

The world has been astounded by the speed and scale of China’s creation of islands and military infrastructure in the South China Sea. Yet the international response to China’s expansions hasn’t gone beyond rhetoric. For example, the US, even at the risk of handing Beijing a fait accompli, has done little to challenge China’s expanding frontiers, focussing its concern just on safeguarding freedom of navigation through the South China Sea. As in the Himalayas and the East China Sea, the US has refused to take sides in the South China Sea in the territorial disputes between China and its neighbours. ASEAN disunity has also aided Beijing’s aggression.

The South China Sea’s centrality to the international maritime order should induce like-minded states to work closely together to positively shape developments there, including by ensuring that continued unilateralism is not cost-free. In fact, the “US-India Joint Strategic Vision for the Asia-Pacific and Indian Ocean Region”, signed a year ago, and the Pentagon’s subsequent “Asia-Pacific Maritime Strategy” emphasize greater maritime cooperation among democratic powers.

China’s neighbours, however, bear the main responsibility. India, for its part, is working to revitalize relationships with Indian Ocean Rim states. It has also stepped up its military diplomacy and is doling out billions of dollars in credit to key littoral states, including in East Africa. But with accidents and project delays blunting its naval power, India needs to speed up its naval modernization. Trade through the Indian Ocean accounts for half of India’s GDP and the bulk of its energy supplies, underscoring the imperative for India to strengthen its naval capabilities on a priority basis.

If ASEAN states and regional powers like Japan and India do not evolve a common strategy to deal with the South China Sea dispute within an Asian framework, the issue will be left to China and the US to address through a great-power modus vivendi, sidelining the interests of the smaller disputants. A unified strategy must give meaning to the recent appeal to all countries by Narendra Modi and Shinzo Abe, the Indian and Japanese prime ministers, to “avoid unilateral actions”, given the “critical importance of the sea lanes in the South China Sea” for the Indo-Pacific region.

Failure to evolve a common strategy could create a systemic risk to Asian strategic stability, besides opening the path for China to gain a firm strategic foothold in the Indian Ocean and encircle India.

Brahma Chellaney is professor of strategic studies at the New Delhi-based Centre for Policy Research.