China claims neighbors’ territories by inventing the ingenious principle “what is ours is ours and what is yours is negotiable.” 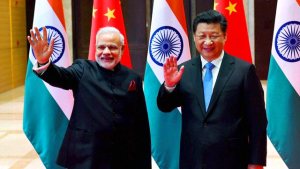 Narendra Modi became the first Indian prime minister to publicly identify China on Chinese soil as an obstacle to closer bilateral ties by asking Beijing to “reconsider its approach” on some key issues. In a similar vein, his national security advisor, Ajit Doval, has classified China’s border stance as a “complete contravention of accepted principles,” pointing out that the Chinese agreed to the McMahon Line in “settling the border with Myanmar” but say “the same line is not acceptable in the case of India, particularly in Tawang.”

Don’t be surprised by this illogicality: In none of its disputes with neighboring countries has China staked a territorial claim on the basis of international law or norms. Rather, its claims flow from its revanchist view of the past — a shifting standpoint that reinterprets history to legitimize claims to territories long held by other countries. Because China does not apply the rule of law at home, it does not recognize its value in international relations.

For China, principles have always been bendable. And when it cannot bend a principle, it creates a new one.

Take its territorial disputes with India: Content with its Switzerland-size land grab (Aksai Chin) in India’s western sector, China pursues expansive claims in the eastern sector that highlight its ingenious principle to covet neighbors’ territories — “what is ours is ours and what is yours is negotiable.”

Having just articulated regional-hegemony aspirations in its defense white paper, China — an outside power — wants to carve out a major role for itself in the Indian Ocean. It has invited India to collaborate with it on deep seabed mining there and join its Maritime Silk Road. Yet it opposes any Indian involvement in the South China Sea. “My sea is my sea but your ocean is our ocean” seems to be a new Chinese saying.

Since 2006, Beijing has claimed the Austria-size Arunachal Pradesh, in northeastern India, as “South Tibet.” To draw attention to the state’s purported Tibetan identity, it has cooked up Tibetan names for subdivisions of Arunachal Pradesh (which includes the Tawang Valley, the gateway to the Dalai Lama’s 1959 escape from his homeland). In border negotiations in recent years, it has pressed India to cede at least Tawang.

China originally fashioned its claim to resource-rich Arunachal Pradesh — a territory almost three times larger than Taiwan — as a bargaining chip to compel India to recognize its occupation of the Aksai Chin plateau. For this reason, China withdrew from the Arunachal areas it had invaded in the 1962 war but retained its territorial gains in Aksai Chin, which provides the only passageway between its rebellious regions — Tibet and Xinjiang. But now, by ratcheting up the Arunachal issue with India, China is signaling that Arunachal (or at least Tawang) is the new Taiwan that must be “reunified” with the Chinese state.

The Dalai Lama, however, has said publicly that Arunachal Pradesh, including Tawang, was traditionally not part of Tibet. Tawang indeed is a Monpa tribal area, and was separated from Tibet by a well-recognized customary line. The Monpas, like several other Himalayan communities, practice Tibetan Buddhism. They belong to the Gelukpa (“Yellow Hats”) sect.

Significantly, China made its specific claim to Tawang not before it waged war against India in 1962 but decades later as part of a maximalist boundary-related stance extending to several other neighbors. For example, China has not only escalated its challenge to Japan’s century-old control of the Senkaku Islands, but is also facing off against the Philippines since sneakily seizing the Scarborough Shoal in 2012.

The India-China border negotiations have dragged on for 34 years — a world record. With no headway on reaching a frontier settlement, Modi in Beijing rightly emphasized the imperative to resume the process — derailed by China 13 years ago — to clarify the line of actual control (LAC). If the LAC remains ill-defined, can confidence-building measures be effective? To facilitate its cross-border military forays, China, however, still opposes clarification, even though the clarification can be done, as Modi pointed out, “without prejudice” to either side’s “position on the boundary question.” In 2002, after more than two decades of negotiations, China reneged on a promise to exchange maps with India covering the two main disputed sectors — Aksai Chin, along with its adjacent areas, and Arunachal Pradesh — located at either end of the Himalayas.

Doval has done well to highlight China’s hypocrisy in accepting the watershed principle — and thus the McMahon Line — with Myanmar but not with India.

Watershed (also called “river basin,” “drainage basin,” and “catchment”) is the total land area that drains surface water into a watercourse like a river, lake, pond, or aquifer. A watershed, easily identifiable on topographic maps, is delineated by a ridge or drainage divide marking the runoff boundary. Below a ridge line, all water will naturally flow downhill. A watershed boundary is identified on a topographic map by first locating the lowest point, or watershed outlet, and then establishing the highest runoff point.

In its October 1, 1960, boundary pact with Myanmar, China settled by acquiescing in the McMahon Line, which delineated the customary border on the basis of the watershed principle. Any deviation from the McMahon Line in the accord was minor and largely necessitated by the task of producing maps of the entire 2,200-km border at 1:50,000 scale, in contrast to the thickly-marked McMahon Line.

Make no mistake: While China settled with Myanmar with a few relatively minor rectifications, it is not seeking slight adjustments with India in the eastern sector. Rather, it covets major chunks of real estate — its largest territorial claims against any nation. Myanmar, of course, poses no threat to China. But the 1960 settlement was also driven by Chinese foreign-policy compulsions, underscored by an insurrection in Tibet since 1959 and border tensions and skirmishes with India.

In deference to Beijing, the pact did not mention the McMahon Line but referred to it euphemistically as the “traditional customary line.” According to the Australian academic Brendan Whyte, “While the McMahon Line was followed here, it was used not because it was the McMahon Line, but because it happened to be a sensible boundary.” More importantly, if China openly acknowledged a line agreed to by the Tibet and British Indian governments, it would be admitting that Tibet was independent then — a historical reality Beijing remains loath to accept.

In fact, just six months after Chinese Premier Zhou Enlai told Prime Minister Jawaharlal Nehru that China would never accept the McMahon Line, Beijing bestowed implicit respectability on that line by signing the Myanmar pact. The accord came in record time — in just nine months after a joint committee was set up to define the border and frame a treaty. The pact settled the boundary in alignment with the watershed between the Irrawaddy and Salween rivers and the “traditional customary line” (the McMahon Line).

For China, the boundary question with India is not just a territorial issue but, more fundamentally, a means to keep its peer rival under pressure and on the defensive constantly. Modi’s visit, unlike President Xi Jinping’s India trip, passed without any reported frontier intrusion, yet the danger remains — given China’s risk-taking muscularity — that a border faceoff could plunge the relationship into renewed antagonisms.

India should do what it can to prevent the frontier disputes and tensions from escalating, while factoring in the likelihood that China will not settle the border with it unless the Chinese communist system or economy crashes. But just as China plays all its cards against India and rears even new ones, India must shed its reticence and do likewise. Without building countervailing leverage, India cannot hope to tame Chinese intransigence and belligerence.