China and Russia up the ante, violent Islamists become more emboldened, and allies are restive

Yet Biden still says he has “no apologies” for his Afghan debacle. America’s self-inflicted defeat and humiliation at the hands of a brutal, Pakistan-backed Islamist militia spawned the greatest victory for terrorists in the modern history of global jihadism.

“I make no apologies for what I did,” Biden defiantly stated at his recent news conference, his first in months. By simply washing his hands of the humanitarian and security nightmare that he created in Afghanistan, Biden has compounded the greatest U.S. foreign-policy disaster in decades.

At a time when global affairs are already in a precarious state, the costs of the Afghan blunder are becoming increasingly apparent, including weakening Biden’s hand against America’s principal adversaries, China and Russia.

While highlighting the decline in American power, the Afghan fiasco has created greater space for China’s muscular revisionism in Asia and enhanced Russia’s geopolitical ambitions in the former Soviet republics extending from Ukraine to Georgia and Kazakhstan.

Worse still, the Taliban’s triumph over the “Great Satan” is serving as a real shot in the arm for Islamic terrorist groups across the world, inspiring jihadi attacks.

One example was the Jan. 15 hostage-taking at a Texas synagogue by a British Pakistani man who sought to free a convicted female Pakistani terrorist, Aafia Siddiqui, serving an 86-year sentence at a nearby prison.

Meanwhile, in the deadliest attack in several years on an Iraqi military base, jihadis recently killed 10 soldiers and an officer. Such attacks raise concerns over the possible rebirth of global terrorism, including the re-emergence of ISIS.

America’s retreat from Afghanistan, meanwhile, is proving a strategic boon for Russia and China, which have ratcheted up their military threats against Ukraine and Taiwan, respectively.

Whereas Russia has massed some 100,000 troops near the Ukrainian border as if poised to invade Ukraine, a record number of Chinese warplanes have intruded into Taiwan’s self-declared air defense identification zone since October.

The U.S. may still be the world’s preeminent military power, but it is in no position to meaningfully take on China and Russia simultaneously. So the U.S.-NATO tensions with Moscow over the Russian military buildup around Ukraine risk whetting Chinese President Xi Jinping’s appetite for risk-taking, especially against Taiwan, his possible next target after notching up successes in the South China Sea and Hong Kong.

Biden’s Afghan disaster, meanwhile, has exacerbated security challenges for America’s regional friends, especially India, which now confronts a strengthening China-Pakistan-Taliban nexus. The rejuvenated epicenter for terrorism in the Afghanistan-Pakistan belt threatens to detract from India’s current efforts to counter China’s border aggression, which began with stealth incursions into the northern Indian territory of Ladakh in April 2020.

While Biden has elevated the Russian military threat against Ukraine to an international crisis, he, in jarring contrast, has not uttered a word on China’s larger-scale Himalayan military buildup that threatens to ignite a war with one of America’s most vital strategic partners, India.

Xi’s summit this week with Russian President Vladimir Putin in Beijing — the Chinese leader’s first face-to-face meeting with a head of state in nearly two years — underlines the deepening strategic axis between China and Russia, which are now “more aligned than at any point since the mid-1950s,” according to a U.S. intelligence assessment. 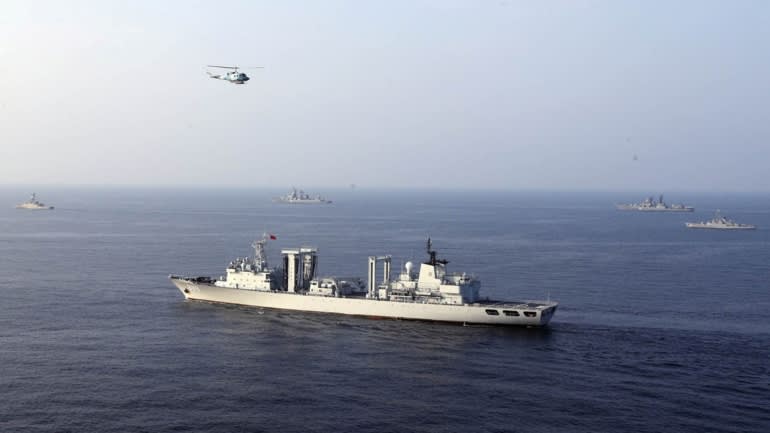 This may be little more than a marriage of convenience so as to jointly collaborate against their common foe in Washington. But since the U.S. defeat in Afghanistan, Beijing and Moscow have surprised America with major joint military exercises, including naval war games off Russia’s Far East coast in October and recent naval drills with Iran in the Gulf of Oman. The Sino-Russian collaboration reportedly extends to hypersonic-weapons technology.

Afghanistan may no longer be grabbing headlines in the West, yet it is ordinary Afghans who are paying for Biden’s blunder, as highlighted by the Taliban’s arbitrary detentions and killings, sexual enslavement of girls through forced “marriages” to their fighters, and stripping women and girls of their rights to education and equality.

The Taliban’s narco-terrorist state, serving as a haven for al-Qaida and other violent jihadi groups, is a threat to regional and international security.

The U.S., for its part, has suffered lasting damage to its international credibility and standing from Biden’s strategic folly in Afghanistan, including throwing America’s allies — the Afghan government and military — under the bus.

The damage is not only emboldening Russia, China and violent Islamists; it also has a bearing on America’s alliances, given that Biden rejected allied demands for a conditions-based withdrawal from Afghanistan.

This adds greater urgency to a question pending since earlier U.S. blunders in Iraq, Syria and Libya: How to reform alliances so that there is less U.S. diktat and more prior consultations with its allies?