Taliban fighters patrol inside the city of Kandahar on Aug. 15: historians will be baffled that the world’s mightiest power waged war for two decades to make the Taliban great again.    © AP

The Kabul Airport massacre is a reminder that the geopolitical consequences of America’s Afghanistan fiasco — one of the biggest foreign policy failures under any U.S. president since World War II — will likely play out for years.

According to German Chancellor Angela Merkel’s potential successor Armin Laschet, this is the “biggest debacle that NATO has suffered since its founding, and we are standing before an epochal change.”

U.S. President Joe Biden paved the way for the Taliban sweep of Afghanistan by pulling the rug out from under the Afghan military’s feet. The sudden withdrawal of some 18,000 U.S. civilian contractors effectively disabled the Afghan military’s planes and helicopters, leaving ground troops without close air support and emergency logistics, including medical evacuation, and rendering the reputable special forces immobile and out of action.

Historians will be baffled that the world’s mightiest power waged war for two decades to make the Taliban, the world’s deadliest terrorists, great again. But the immediate message from Biden’s Afghanistan disaster is that U.S. allies cannot count on America when the chips are down. The damage to America’s reputation and credibility could potentially herald a paradigm shift in international geopolitics.

Already, the image of America’s betrayal of its Afghan allies and capitulation to the Taliban has become etched indelibly in the global imagination. Indeed, a secret meeting between CIA Director William Burns and the Taliban leadership in Kabul on Aug. 23 has only underscored the troubling U.S. equation with an Islamist militia whose brutality has been a hallmark of its fundamentalism.

With Biden quickly blaming a local ISIS affiliate for the airport bombing and ordering reprisals against the group, the U.S. has been left to draw specious distinctions between good and bad terrorists.

Given Afghanistan’s strategic location at the crossroads of Central, South and Southwest Asia, the greatest strategic fallout from Afghanistan’s security and humanitarian catastrophe is likely to be felt in the Asian region. This is ironic because Biden sought to justify his withdrawal as necessary to focus on the great-power competition with China.

In reality, the void opened by America’s retreat has only given greater strategic space for China, Russia and Iran to expand their strategic footprints. For securing oil deliveries, the Taliban are now paying a cash-strapped Iran in dollars from their lucrative narcotics trade.

China, with its long-standing ties to the Taliban, including supplying weapons via Pakistan, has taken the lead in portraying the U.S. as a declining power whose ditching of the Afghan government demonstrates that it is an unreliable partner for any country.

America’s self-inflicted defeat and humiliation in Afghanistan has also blunted U.S. leverage to determine China’s coronavirus culpability, including pressuring Beijing to share lab records, genomic samples and other data relevant to finding out how the COVID-19 virus originated. It is thus no surprise that the Biden-ordered U.S. intelligence inquiry, at the end of its 90-day deadline, has failed to reach a definitive conclusion on the virus’ origins, although time is running out to find reliable answers.

If the intelligence inquiry — like the recent report by congressional Republicans — had concluded that the virus leaked from a Wuhan lab, it could have further ruptured already fraught relations with China, which has been demanding that the U.S. stop tracing the origins of the virus.

At a time when Biden is grappling with an Afghan disaster of his own making, he can ill afford a crisis in ties with China, which explains why he did not extend the term of the intelligence inquiry but instead called on a recalcitrant Beijing “to cooperate with the World Health Organization’s Phase II evidence-based, expert-led determination into the origins of COVID-19.” 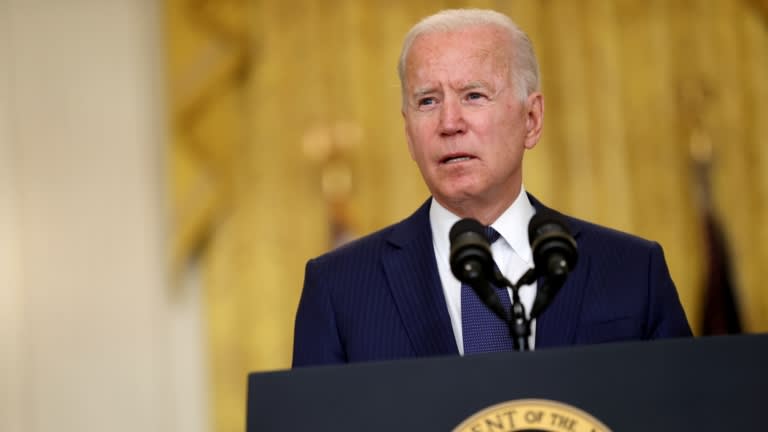 President Joe Biden delivers remarks about Afghanistan on Aug. 26: at a time when Biden is grappling with an Afghan disaster of his own making, he can ill afford a crisis in ties with China.   © Reuters

After Kabul’s fall, China’s victory lap included a state-media warning to Taiwan that the U.S. would abandon it too in the face of a Chinese invasion, prompting Taiwanese President Tsai Ing-wen to declare, “Taiwan’s only option is to grow stronger… It is not our option to do nothing and only rely on others for protection.”

One definite loser from the Afghanistan debacle is India, whose security risks are coming under siege from the Taliban-Pakistan-China coalition. India, one of the largest aid donors to Afghanistan, had a big presence in that country, but its diplomats and civilians were among the first to flee.

Since last year, India has been locked in military standoffs with China, its leading adversary. But if India now faces a greater terrorist threat from across its western borders, it will have less capacity to counter an expansionist China. Afghanistan’s fall will likely strengthen the anti-India axis between the Taliban’s sponsor, Pakistan, and Pakistan’s main patron, China.

Will Biden now revoke the major non-NATO ally (MNNA) status enjoyed by Afghanistan and Pakistan, which engineered the U.S. rout through its proxy? Fifteen other countries, including Japan, Australia and Israel, have MNNA status, which carries security benefits under U.S. law.

By empowering the Taliban, Biden has strengthened all jihadi groups, promising the rebirth of global terrorism. And by betraying one ally — the elected Afghan government — he has made other U.S. allies feel that they too could be betrayed when they most need American support. Nowhere will the U.S. costs for its Afghanistan blunder be more visible than in Asia, where an emboldened China is set to up the ante.