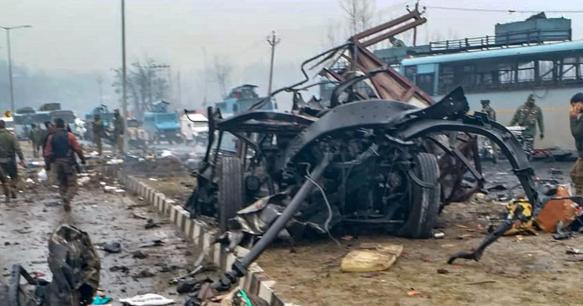 Once again, an attack on India by a Pakistan-based terrorist group has raised the specter of a major confrontation on the Indian subcontinent – and fueled international pressure for Pakistan to take concrete action against the 22 United Nations-designated terrorist entities it hosts. But this time, the pressure is compounded by fury over attacks by Pakistan-based terrorists on the country’s other key neighbors, Iran and Afghanistan. Will Pakistan finally respond convincingly?

Over the years, the footprints of many terrorist attacks in the West have been traced to Pakistan. The United States found al-Qaeda leader Osama bin Laden ensconced in the high-security garrison town of Abbottabad, in the shadow of the Pakistan Military Academy. Other terrorist leaders captured since the September 11, 2001, terrorist attacks in the US – including Khalid Sheikh Mohammed, al-Qaeda’s third in command, and Abu Zubeida, the network’s operations chief – were also found living in Pakistan’s heartland.

Such revelations have often fueled calls for Pakistan to tackle its transnational terrorism problem. Last year, US President Donald Trump tweeted that, though Pakistan received more than $33 billion in American aid since 2002, it has returned “nothing but lies and deceit,” including providing “safe haven to the terrorists we hunt in Afghanistan.” The US – which has long had contingency plans to seize Pakistan’s nuclear weapons, if necessary, to prevent terrorists from getting their hands on them – then suspended security aid.

Recent attacks have reinvigorated demands for Pakistan to take action – amid threats of reprisal. On February 14, a suicide bombing claimed by the group Jaish-e-Mohammed killed 41 Indian paramilitary soldiers in India-administered Kashmir. In the same week, another suicide bombing – this one claimed by a group called Jaish ul-Adl – killed 27 Islamic Revolutionary Guard Corps members and injured 13 others in southeastern Iran, and a Taliban strike killed 32 Afghan troops at a remote base.

Since then, India and Pakistan have engaged in tit-for-tat aerial incursions, and Iran has vowed to retaliate. The US has stressed the “urgency” of Pakistan taking meaningful action against terrorist groups. If Pakistan is moved from the “gray” to “black” list of the Paris-based Financial Action Task Force (FATF) – which recently chastised the country for failing to cut off terrorist financing and demanded concrete action by May – Western sanctions will probably follow.

Pakistan’s position as a mecca of terrorism is now raising concerns among even its main patrons – China, which has long stood with it against India, and Saudi Arabia, its bulwark against Iran – which have lent it no support in its present crisis with India. More than ever, Pakistan finds itself internationally isolated, and risks becoming a global pariah.

Beyond the geostrategic repercussions, this outcome poses a grave threat to Pakistan’s economy, which is teetering on the brink of default. Despite having secured emergency loans from China, Saudi Arabia, and the United Arab Emirates, Pakistan desperately needs a large International Monetary Fund bailout. And while a $12 billion IMF deal is in the works, the situation will only deteriorate further if the FATF blacklists Pakistan.

To avoid this, Pakistan’s government is signaling its intent to crack down on terrorist groups. But the international community should not get its hopes up. With the military still dominant, the toothless civilian leadership is offering only tentative, reversible measures, suggesting a likely return to business as usual as soon as external pressure has eased.

Pakistan’s all-powerful military establishment – which includes the rogue Inter-Services Intelligence agency – is loath to sever its cozy alliances with terrorist groups. It would prefer to continue nurturing armed jihadists as a force multiplier in its low-intensity asymmetric wars against neighboring countries. Pakistan’s nuclear weapons enable this approach, because they shield its military and state-nurtured terrorist groups from retaliation.

This constraint is reflected in India’s response to the Pakistani military’s long-term strategy of inflicting on India “death by a thousand cuts.” Pakistan’s protracted terrorism-centered asymmetric warfare has, cumulatively, proved costlier for India than any past full-fledged war on the subcontinent, including the 1971 war that resulted in the creation of Bangladesh. But, as India’s patience wears thin, a limited war that calls the Pakistani generals’ nuclear bluff is no longer inconceivable.

But nuclear weapons are not the only factor protecting Pakistan’s generals. Despite Trump’s complaints, the US has yet to strip Pakistan of its “Major Non-NATO Ally” status or to add the country to its list of state sponsors of terrorism. The reason is simple: Pakistan is now a gatekeeper of America’s geopolitical interests in the region.

Not only does the US supply its Afghanistan-based troops largely via Pakistan; it is depending on Pakistani help in finalizing a peace deal with the Taliban. In other words, Pakistan’s generals are now being rewarded for sponsoring terror in Afghanistan through their brutal proxies – the Taliban and the Haqqani Network – which, according to Afghan President Ashraf Ghani, have killed as many as 45,000 Afghan security personnel since 2014 alone. The message is clear: sponsoring cross-border terrorism pays.

The battle against international terrorism cannot be won unless the nexus between terrorist groups and Pakistan’s military is severed. A good place to start would be to make the IMF bailout contingent on concrete counter-terrorism action. In the longer term, however, civilian-military relations must be rebalanced: the Pakistani generals’ viselike grip on power must be broken, and the military, intelligence, and nuclear establishment must be subordinated to the civilian government.

The international community has enough leverage to force change in debt-ridden and dysfunctional Pakistan. But, to use it, Trump would need to rethink his Faustian bargain with the Taliban. And, unfortunately, that seems unlikely to happen.