Skip to primary content
It is vital that Myanmar’s military immediately halt human-rights abuses of Rohingya in Rakhine State. But it is also vital for the international community to reject the prevailing depiction of the current crisis, which fails to recognize the long history of violent extremism among Rohingya militants. 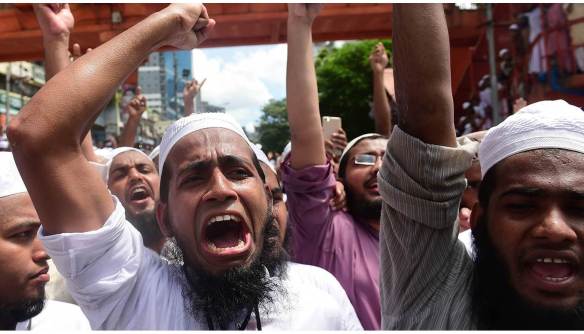 Myanmar’s military has lately been engaged in a brutal campaign against the Rohingya, a long-marginalized Muslim ethnic minority group, driving hundreds of thousands to flee to Bangladesh, India, and elsewhere. The international community has rightly condemned the crackdown. But, in doing so, it has failed to recognize that Rohingya militants have been waging jihad in the country – a reality that makes it extremely difficult to break the cycle of terror and violence.

Rakhine State, where most of Myanmar’s Rohingya reside, is attracting jihadists from far and wide. Local militants are suspected of having ties with the Islamic State (ISIS), al-Qaeda, and other terrorist organizations. Moreover, they increasingly receive aid from militant-linked organizations in Saudi Arabia and Pakistan. The main insurgent group – the well-oiled Arakan Rohingya Salvation Army, also known as Harakah al-Yaqin – is led by a Saudi-based committee of Rohingya émigrés.

The external forces fomenting insurgent attacks in Rakhine bear considerable responsibility for the Rohingyas’ current plight. In fact, it is the links between Rohingya militants and such external forces, especially terrorist organizations like ISIS, that have driven the government of India, where some 40,000 Rohingya have settled illegally, to declare that their entry poses a serious security threat. Even Bangladesh acknowledges Rohingya militants’ external jihadi connections.

But the truth is that Myanmar’s jihadi scourge is decades old, a legacy of British colonialism. After all, it was the British who, more than a century ago, moved large numbers of Rohingya from East Bengal to work on rubber and tea plantations in then-Burma, which was administered as a province of India until 1937.

In the years before India gained independence from Britain in 1947, Rohingya militants joined the campaign to establish Pakistan as the first Islamic republic of the postcolonial era. When the British, who elevated the strategy of “divide and rule” into an art, decided to establish two separate wings of Pakistan on either side of a partitioned India, the Rohingya began attempting to drive Buddhists out of the Muslim-dominated Mayu peninsula in northern Rakhine. They wanted the Mayu peninsula to secede and be annexed by East Pakistan (which became Bangladesh in 1971).

Failure to achieve that goal led many Rohingya to take up arms in a self-declared jihad. Local mujahedeen began to organize attacks on government troops and seize control of territory in northern Rakhine, establishing a state within a state. Just months after Myanmar gained independence in 1948, martial law was declared in the region; government forces regained territorial control in the early 1950s.

But Rohingya Islamist militancy continued to thrive, with mujahedeen attacks occurring intermittently. In 2012, bloody clashes broke out between the Rohingya and the ethnic Rakhines, who feared becoming a minority in their home state. The sectarian violence, in which rival gangs burned down villages and some 140,000 people (mostly Rohingya) were displaced, helped to transform the Rohingya militancy back into a full-blown insurgency, with rebels launching hit-and-run attacks on security forces.

Similar attacks have lately been carried out against security forces and, in some cases, non-Rohingya civilians, with the violence having escalated over the last 12 months. Indeed, it was a wave of coordinated predawn insurgent attacks on 30 police stations and an army base on August 25 that triggered the violent military offensive that is driving the Rohingya out of Rakhine.

Breaking the cycle of terror and violence that has plagued Myanmar for decades will require the country to address the deep-seated sectarian tensions that are driving Rohingya toward jihadism. Myanmar is one of the world’s most ethnically diverse countries. Its geographic position makes it a natural bridge between South and Southeast Asia, and between China and India.

But, internally, Myanmar has failed to build bridges among its various ethnic groups and cultures. Since independence, governments dominated by Myanmar’s Burman majority have allowed postcolonial nativism to breed conflict or civil war with many of the country’s minority groups, which have complained of a system of geographic apartheid.

The Rohingya face the most extreme marginalization. Viewed as outsiders even by other minorities, the Rohingya are not officially recognized as one of Myanmar’s 135 ethnic groups. In 1982, the government, concerned about illegal immigration from Bangladesh, enacted a law that stripped the Rohingya of their citizenship, leaving them stateless.

Successive governments have defended this approach, arguing that past secessionist movements indicate that the Rohingya never identified as part of the country. And, in fact, the common classification of Rohingya as stateless “Bengalis” mirrors the status of Rohingya exiles in the country of their dreams, Pakistan, where tens of thousands took refuge during the Pakistani military genocide that led to Bangladesh’s independence.

Still, the fact is that Myanmar’s failure to construct an inclusive national identity has allowed old ethnic rivalries to continue to fuel terrorism, stifling the resource-rich country’s potential. What Myanmar needs now is an equitable, federalist system that accommodates its many ethnic minorities, who comprise roughly a third of the population, but cover half of the total land area.

To this end, it is critical that Myanmar’s military immediately halt human-rights abuses in Rakhine. It will be impossible to ease tensions if soldiers are using disproportionate force, much less targeting civilians; indeed, such an approach is more likely to fuel than quell violent jihadism. But as the international community pressures Myanmar’s de facto leader Aung San Suu Kyi to take stronger action to protect the Rohingya, it is also vital to address the long history of Islamist extremism that has contributed to the ethnic group’s current plight.

Brahma Chellaney, Professor of Strategic Studies at the New Delhi-based Center for Policy Research and Fellow at the Robert Bosch Academy in Berlin, is the author of nine books, including Asian Juggernaut, Water: Asia’s New Battleground, and Water, Peace, and War: Confronting the Global Water Crisis.
© 2017 Project Syndicate.