By BRAHMA CHELLANEY, a column internationally syndicated by Project Syndicate 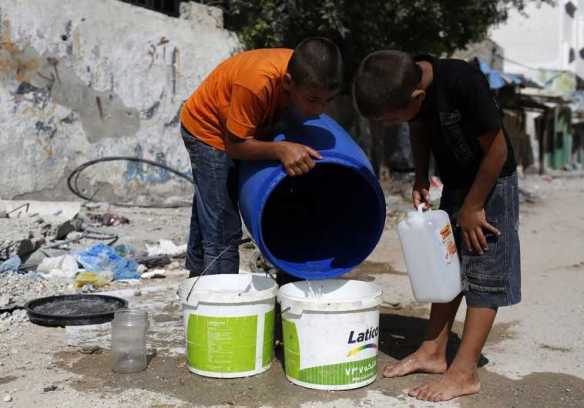 Nowhere is freshwater scarcer than in the Arab world. The region is home to most of the world’s poorest states or territories in terms of water resources, including Bahrain, Djibouti, Gaza, Jordan, Kuwait, Libya, Qatar, Saudi Arabia, and the United Arab Emirates. This shortage – exacerbated by exploding populations, depletion and degradation of natural ecosystems, and popular discontent – is casting a shadow over these countries’ future.

There is no shortage of challenges facing the Arab world. Given that many Arab states are modern constructs invented by departing colonial powers, and therefore lack cohesive historical identities, their state structures often lack strong foundations. Add to that external and internal pressures – including from surging Islamism, civil wars, and mass migration from conflict zones – and the future of several Arab countries appears uncertain.

What few seem to recognize is how water scarcity contributes to this cycle of violence. One key trigger of the Arab Spring uprisings – rising food prices – was directly connected to the region’s worsening water crisis. Water also fuels tensions between countries. Saudi Arabia and Jordan, for example, are engaged in a silent race to pump the al-Disi aquifer, which they share.

Water can even be wielded as a weapon. In Syria, the Islamic State has seized control of the upstream basins of the two main rivers, the Tigris and the Euphrates. The fact that nearly half of all Arabs depend on freshwater inflows from non-Arab countries, including Turkey and the upstream states on the Nile River, may serve to exacerbate water insecurity further.

Sky-high fertility rates are another source of stress. According to a United Nationsreport, average annual water availability in the Arab world could fall to 460 cubic metersper capita – less than half the water-poverty threshold of 1,000 cubic meters. In this scenario, water extraction will become even more unsustainable than it already is, with already-limited stores depleted faster than ever – a situation that could fuel further turmoil.

Finally, many countries offer subsidies on water, not to mention gasoline and food, in an effort to “buy” social peace. But such subsidies encourage profligate practices, accelerating water-resource depletion and environmental degradation.

In short, the Arab world is increasingly trapped in a vicious cycle. Environmental, demographic, and economic pressures aggravate water scarcity, and the resulting unemployment and insecurity fuels social unrest, political turmoil, and extremism. Governments respond with increased subsidies on water and other resources, deepening the environmental challenges that exacerbate scarcity and lead to unrest.

Urgent action is needed to break the cycle. For starters, countries should phase out the production of water-intensive crops. Grains, oilseeds, and beef should be imported from water-rich countries, where they can be produced more efficiently and sustainably.

For the crops that Arab countries continue to produce, the introduction of more advanced technologies and best practices from around the world could help to reduce water use. Membrane and distillation technologies can be used to purify degraded or contaminated water, reclaim wastewater, and desalinate brackish or ocean water. Highly efficient drip irrigation can boost the region’s fruit and vegetable production, without excessive water use.

Another important step would be to expand and strengthen water infrastructure to address seasonal imbalances in water availability, make distribution more efficient, and harvest rainwater, thereby opening up an additional source of supply. Jordan, with Israeli collaboration and European Union aid, is creating a Red Sea-Dead Sea pipeline, a conduit that would desalinate Red Sea water, in order to provide potable water to Jordan, Israel, and the Palestinian territories, and then funnel the brine to the dying Dead Sea.

Improved water management is also crucial. One way to achieve this is to price water more appropriately, which would create an incentive to prevent wastage and conserve supplies. While subsidies need not be eliminated completely, they should be targeted at smaller-scale farmers or other high-need workers and redesigned so that they, too, provide incentives for water conservation and efficiency.

Of course, wealthier, more stable countries like Saudi Arabia, Qatar, Kuwait, and the UAE are better placed than conflict-torn countries like Yemen, Libya, and Iraq to address the rapidly intensifying water crisis they face. But, in order to break the cycle of violence and insecurity, all countries will ultimately have to step up to improve water management and protect ecosystems. Otherwise, their water woes – along with internal unrest – will only worsen.