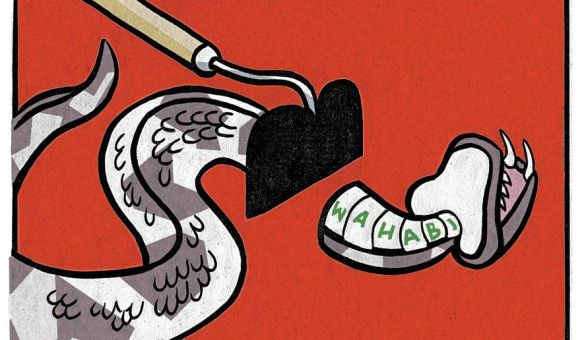 In the wake of the worst mass shooting in U.S. history, it is pointless to debate whether the Orlando killings constitute just an act of Islamist terror or also an act of hate directed at the LGBT community. Every act of terror springs from hatred of its target, be it a nation or government or community.

Make no mistake: Wahhabi fanaticism is terrorism’s ideological mother, whose offspring include groups such as al Qaeda, the Taliban, Laskar-e-Taiba, Boko Haram, al-Shabab and Islamic State, all of which blend hostility toward non-Sunnis and anti-modern romanticism into nihilistic rage.

The only way to defeat an enemy driven by ideology is to emasculate its ideology. The West won the Cold War not so much by military means as by spreading the ideas of political freedom and market capitalism that helped suck the lifeblood out of communism’s international appeal, making it incapable of meeting the widespread yearning for a better, more open life.

Today, stemming the spread of the ideology that has fostered “jihad factories” holds the key to containing terrorism. The export of Wahhabism by Saudi Arabia, Qatar and some other oil sheikhdoms is the source of modern Islamist terror.

Yet the rest of the world — in thrall to Arab money and reliant on Arab oil and gas — has largely turned a blind eye to the jihadi agenda of some Arab monarchs. In fact, with Western support, tyrannical oil monarchies in Riyadh, Doha and elsewhere were able to ride out the Arab Spring, emerging virtually unscathed.

Saudi Arabia has faced little international pressure, even on human rights. How the Saudi kingdom buys up world leaders is apparent from the Malaysian attorney general’s claim that Prime Minister Najib Razak received a $681 million “personal donation” from the Saudi royals. Saudi Arabia has given as much as $25 million to the Clinton Foundation.

There are signs, however, that the Western attitude toward Saudi Arabia might be beginning to change. German Vice Chancellor Sigmar Gabriel said recently, “We must make it clear to the Saudis that the time of looking the other way is over.” After a married couple of Pakistani origin staged a mass shooting in San Bernardino, President Obama alluded to Wahhabism as a “perverted interpretation of Islam.”

No country has contributed more than Saudi Arabia to the international spread of Wahhabism, which is gradually snuffing out more liberal Islamic traditions in many countries. Jihadism and sectarianism indeed are institutionalized in Saudi Arabia, the only country in the world named after its founder, commonly known as Ibn Saud.

Saud, who ruled for 20 years until his death, brought the central part of the Arabian Peninsula under his control with British assistance in 1932, establishing a desert kingdom tethered to Wahhabism, a messianic radicalism that was considered a fringe form of Islam until oil wealth transformed the once-barren Saudi Arabia, the world’s largest country without a river.

Since the oil-price boom of the 1970s, Saudi Arabia has spent more than $200 billion on its global jihad project, including funding Wahhabi madrassas, mosques, clerics and books. Western powers actually encouraged the kingdom — as an antidote to communism and the 1979 anti-U.S. Iranian revolution — to export Wahhabism.

But the wave of new attacks serve as a reminder that Wahhabi fanaticism is the root from which Islamist terrorists draw their ideological sustenance. As Vice President Joe Biden said in a 2014 Harvard speech, Saudi and other “allies’ policies wound up helping to arm and build allies of al Qaeda and eventually the terrorist Islamic State.”

Today, with its own future more uncertain than ever, the House of Saud is increasingly playing the sectarian card in order to shore up support among the Sunni majority at home and to rally other Islamist rulers in the region to its side. Having militarily crushed the Arab Spring uprising in Sunni-led but Shia-majority Bahrain, Saudi Arabia early this year executed its own Arab Spring leader — Sheikh Nimr al-Nimr — who had led anti-regime Shia protests in 2011.

Before the execution, the kingdom formed an alliance of Sunni states purportedly to fight terrorism. The coalition included all the main sponsors of international terror, like Qatar and Pakistan. It was like arsonists pretending to be fire wardens.

According to a U.N. panel of experts, Saudi Arabia is currently engaged in war crimes in Yemen.

The Saudi royals seem to mistakenly believe that widening the sectarian fault lines in the Islamic world will keep them in power. By drawing legitimacy from jihadism and by being beholden to sectarianism, the royals could be digging their own graves. After all, fueling jihadism and sectarianism threatens to empower extremists at home and devour the royalty.

More broadly, the global war on terror cannot be won without closing the wellspring that feeds terrorism — Wahhabi fanaticism. Wahhabism is the ultimate source of the hatred that triggered September 11, 2001, and the recent string of attacks, from Paris and Brussels to San Bernardino and Orlando. Shutting that wellspring demands that the West hold Arab monarchs to account for spawning the kinds of dangerous extremists that are imperiling regional and international security.

The late Singaporean leader Lee Kuan Yew rightly said in 2003 that success of the war on terror hinges more on controlling the “queen bees” — the “preachers” of the “deviant form of Islam” — than on just killing the “worker bees” (terrorists). As long as Arab petro-dollars keep “jihad factories” in business, there will be suicide killers.

• Brahma Chellaney is a geostrategist and the author, most recently, of “Water, Peace, and War” (Rowman & Littlefield, 2015).