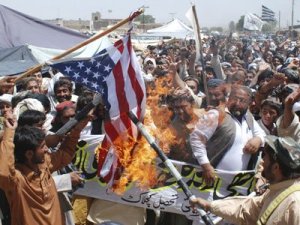 America, despite a deepening relationship with India, still extends munificent aid to Pakistan — “the ally from hell”, as ex-CIA chief Michael Hayden calls it in his just-released book Playing to the Edge. Pakistan, with one of the world’s lowest tax-to-GDP ratios, has the unique status of being a client state of three powers on which it is more dependent than ever for aid — China, America and the jihad-bankrolling Saudi Arabia. US aid actually bolsters China’s strategy to box in India while encouraging Pakistan to diabolically sponsor terrorism.

Take US President Barack Obama’s latest move to reward Pakistan with 8 more subsidized F-16s and hundreds of millions of dollars in additional aid under the Overseas Contingency Operations fund, dubbed the “slush fund” because it is not subject to the same oversight as the regular Pentagon and state department budgets. Obama’s $860-million aid proposal includes $265 million worth of military hardware under the Foreign Military Financing provision, which, despite its name, permits non-repayable grants. The $700-million deal centred on F-16s is separate.

Two of the objectives cited by the state department in support of additional aid for Pakistan are promoting “improved relations with India” and peace in Afghanistan. How bolstering a renegade Pakistan financially and militarily would encourage it to improve ties with India or Afghanistan has been left unsaid. The US, by persistently rewarding a country that refuses to cut its umbilical ties with terrorists, has only exacerbated India’s security challenges.

Indeed, to continue showering Pakistan with aid (which has totalled a staggering $32.6 billion since 9/11), Obama has bent over backward to shield it from sanctions. Contrast that with his alacritous embrace of sanctions against several other countries in the past seven years.

Obama rebuffed congressional advice last year to suspend some aid to Pakistan and impose travel restrictions on Pakistani officials known to have ties to terrorists. Even when Osama bin Laden was found holed up in a lair next to Pakistan’s top military academy, Obama shied away from imposing sanctions. The issue as to how bin Laden was able to hide in a military town was allowed to fade away for the same reason that Pakistan (or anyone there) was not held to account for running the world’s largest nuclear proliferation ring, led by A.Q. Khan.

Obama’s zeal to shield the double-talking Pakistan has extended to persuading its terror target, India, to hold talks with it. If Prime Minister Narendra Modi’s Pakistan policy lies in tatters today, some of the blame must go to Obama, who beguilingly led him up the garden path with specious assurances on Pakistani behaviour.

Modi took office with a prudent approach toward Pakistan — inviting Prime Minister Nawaz Sharif to his inauguration but sidelining the Pakistan issue so as to focus on foreign-policy priorities more amenable to progress. In September 2014, Modi told the UN that “a serious bilateral dialogue with Pakistan” was only possible “without the shadow of terrorism”. But after Obama’s last India visit, Modi made a U-turn in his Pakistan policy, only to induce new cross-border terror attacks, from Gurdaspur to Udhampur.

Undaunted, Modi paid a surprise visit to Pakistan. Far from heralding a promising new era, the Christmas Day trip quickly invited daring Pakistani terror attacks at Pathankot and Mazar-i-Sharif. Today, Modi’s silence on Pakistan underscores the dilemma haunting him — how to fix a broken Pakistan policy. Why Modi yielded to a lame-duck US president is a pertinent question that remains unanswered.

Obama, despite a weak, divisive legacy even at home, got the world’s largest democracy to reverse course on Pakistan — an “achievement” whose regional fallout has been only negative, including denting Modi’s credibility and undermining Indian deterrence under his leadership. The net effect has been to present Modi since Pathankot as some sort of a paper tiger.

Still, with the Nuclear Security Summit forthcoming in Washington, there is little sign of Modi salvaging his Pakistan policy from US manoeuvrings. Indeed, by deciding to welcome Pakistani investigators in the Pathankot case, India bought the myth that terror groups like the Jaish-e-Mohammad (JeM) are independent of the Pakistani state. Army chief Dalbir Singh wants Pakistan “isolated” but Modi is doing the opposite — providing it diplomatic succour.

Consider this: Even as India presses Islamabad to prosecute JeM leaders for the Pathankot and Mazar-i-Sharif strikes, an emboldened Pakistan has used Lashkar-e-Taiba to carry out the Pampore attack. Jalalabad has followed Mazar-i-Sharif. Pakistan has also unleashed the mastermind of the 2008 Mumbai attacks, Hafiz Saeed, against India. Saeed’s very public life, including leading a recent Islamabad rally, mocks the Obama administration’s $10 million bounty on his head and India’s fond hope that Pakistan would rein in terrorist proxies. Clearly, US’s 2012 bounty was just to placate India and buy its cooperation on Pakistan.

Obama’s disastrous policy has strengthened Pakistan as the world’s leading terrorist sanctuary. The scourge of terrorism emanates more from Pakistan’s Scotch whisky-sipping military generals than from its bead-rubbing mullahs. Yet the White House pampers the generals at the expense of Pakistan’s civilian institutions. Washington highlighted the rot in its Pakistan policy by feting army chief Raheel Sharif in November.  Indeed, Gen. Sharif has been awarded the US Legion of Merit for his contributions to, believe it or not, “peace and security”. Tellingly, Washington’s latest aid and F-16 decisions coincided with its Defence Intelligence Agency chief’s warning that Pakistan’s expanding nuclear arsenal, including low-yield tactical nukes for battlefield use, increases “the risk of an incident or accident”.

By wielding only carrots and no stick, the Obama team has allowed itself to be repeatedly duped by false Pakistani promises, some of which it has religiously fed India. Its counterproductive policy has not only turned Uncle Sam into Uncle Sucker but also made it easy for Pakistan to merrily run with the foxes and hunt with the hounds — at grave cost to the security of America’s friend India.