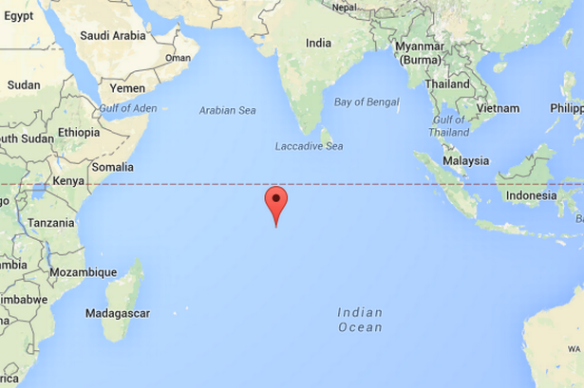 The U.S. naval and air force base at the British-controlled atoll of Diego Garcia is located strategically in the middle of the Indian Ocean.

The emerging centrality of the Indian Ocean for global trade and energy flows and for a stable balance of power in Asia is sharpening geopolitical competition in the wider region, home to prominent strategic chokepoints such as the Malacca and Hormuz straits. More than half of the world’s container traffic, 70% of its seaborne petroleum trade and a third of all maritime traffic traverses the Indian Ocean, the world’s third-largest body of water, which connects Asia with Africa and, via the Middle East, with Europe.

No less important, the Indian Ocean Rim may be poised to emerge as the world’s fastest-growing region in economic terms over the next decade, according to a recent assessment by the Center for International Development at Harvard University. After two centuries of Atlantic domination followed by the rise of the Pacific Rim, the Indian Ocean Rim could become the next growth engine, amid relatively slow growth in the mature economies and a relentless slowdown in China.

Meanwhile, as outside and local powers joust for access, influence and relative advantage in the region, the Indian Ocean is witnessing a maritime version of the 19th century Great Game — the rivalry between the British and Russian empires for influence in Central Asia. Four national strategies — China’s Maritime Silk Road project, America’s “pivot” to Asia, Japan’s western-facing approach, and India’s Act East Policy — intersect in the Indian Ocean.

China’s Maritime Silk Road — a catchy name for Beijing’s “string of pearls” policy of advancing strategic interests along its trade routes — is centered in the Indian Ocean, with China employing aid, investment and political leverage to pursue geostrategic objectives. A pet project of President Xi Jinping, its larger goal is to redraw Asia’s geopolitical map by pulling strategically located states closer to China’s orbit. It also seeks to deal with China’s problem of overproduction at home by winning lucrative overseas contracts for its state-run companies to build seaports, railroads, highways and energy pipelines in states located along the great trade arteries.

The U.S. has the largest military footprint of any power in the Indian Ocean, including a major naval and air force base at the British-controlled atoll of Diego Garcia, which is located halfway between Africa and Indonesia and serves as a logistic-support center for American military missions in Afghanistan, Syria and Iraq. America’s much-publicized “pivot” to Asia has drawn attention to the ocean’s critical importance. Preoccupied with the Middle East, Washington has yet to provide strategic heft to its pivot, but it has encouraged both India’s Act East policy of building economic and strategic partnerships with likeminded Asian countries and Japanese Prime Minister Shinzo Abe’s pursuit of a western-facing policy focused on mainland Asia and the Indian Ocean. Over the last few years, the U.S. has signed approximately $10 billion in defense sales to India, according to Rich Verma, U.S. ambassador to India.

Japan, which imports 96% of its energy requirements, has become increasingly concerned about maritime security in the Indian Ocean, through which three-fifths of its energy supplies pass. Japan’s ongoing national security reforms are opening the path for it to collaborate closely with friendly Indian Ocean Rim countries such as India and Indonesia, and to play a more active role in ensuring the security of the region’s critical sea lanes. Tokyo has already eased its long-standing self-imposed ban on arms exports and reasserted its right to exercise “collective self-defense.”

One manifestation of the increasing geopolitical competition in the Indian Ocean is a naval arms race, especially under the waves. China boasts one of the fastest-growing undersea fleets in the world. It has already surpassed the U.S. submarine fleet in quantity, although not quality. But as it works to further expand its force of diesel and nuclear attack submarines, China’s territorial and maritime assertiveness and muscular actions are prompting other countries to acquire submarines as well as submarine-hunting aircraft.

About a year ago, Chinese attack submarines undertook their first known voyages to the Indian Ocean, with a Song-class diesel-electric submarine and then a Type 091 Han-class nuclear-powered boat docking at a new Chinese-majority-owned container terminal in Colombo, Sri Lanka’s capital. This year, a Chinese submarine docked at the Pakistani port of Karachi. Earlier, Beijing conveyed to New Delhi its decision to deploy a Type-093 Shang–class nuclear-powered attack submarine for Indian Ocean patrol.

For New Delhi, China’s increasing naval forays into India’s maritime backyard carry long-term strategic implications. Just as China’s annexation of Tibet in 1951 created a northern, trans-Himalayan military threat for the first time in Indian history, its Maritime Silk Road promises to open an oceanic threat from the south for the first time since the European colonial depredations of the 18th and 19th centuries. Indeed, a Beijing-based defense website, Sina Military Network, claimed earlier this year that 10 Chinese attack submarines could blockade India’s eastern and western coastlines.

The larger strategic risk for India is that China, in partnership with its close ally Pakistan, could encircle it on land and at sea. Although trade through the Indian Ocean accounts for half of India’s gross domestic product and the bulk of its energy supplies, accidents and project delays have left its diesel submarine fleet severely depleted. India has one nuclear-powered sub on lease from Russia and is completing another domestically as it seeks to bolster its anti-submarine capabilities.

India has also stepped up its military diplomacy and is doling out billions of dollars in credit to key littoral states. At the recent India-Africa summit in New Delhi, attended by leaders of 54 African nations, India pledged $10 billion in new credit and $600-million grant aid, in addition to $7.4 billion in soft loans and $1.2 billion in aid provided since the first such summit in 2008.

At the same time, New Delhi is working to revitalize relationships with Indian Ocean Rim states in the Persian Gulf and elsewhere, including neighboring Myanmar, Bangladesh, Sri Lanka and Indonesia, whose northern tip is close to India’s Nicobar Islands territory. Using cultural affinity — an asset China lacks in region — India has sought to revive linkages along the ancient Spice Route, which had the Indian peninsula as its hub. Indian Prime Minister Narendra Modi has been conveying the message: “Our destinies are linked by the currents of the Indian Ocean.”

Meanwhile, China has finalized the sale of eight diesel-electric submarines to Pakistan, a transfer that would more than double the size of that country’s submarine fleet. Thailand is also poised to buy Chinese submarines, paying more than $1 billion for three. Indonesia, like Vietnam previously, is procuring Kilo-class vessels from Russia. It was this class of Russian boats that launched China’s own submarine modernization program.

Indian Ocean security is also linked to developments in the South China Sea, where threats to freedom of navigation and maritime security have arisen from China’s creation of artificial islands, its effort to establish a major military base on one of them, and its declaration of an expansive exclusive economic zone. Indeed, Chinese Vice Admiral Yuan Yubai claimed on Sept. 14 that the South China Sea “belongs to China.”

The U.S., aware that China’s maneuvering in the Indian Ocean draws strength from its muscular actions in the South China Sea, has been working with its allies and partners to address these challenges. The U.S.-India Joint Strategic Vision for the Asia-Pacific and Indian Ocean Region — signed during President Barack Obama’s New Delhi visit in January — and the Pentagon’s subsequent Asia-Pacific Maritime Security Strategy emphasize the importance of greater maritime cooperation among democratic powers.

Yet, even at the risk of handing Beijing a fait accompli, the U.S. has restricted itself to lodging diplomatic protests over China’s creation of artificial islands in the South China Sea. It has thus far shied away from, on a regular basis, carrying out “freedom of navigation” flyovers or sail-throughs within a 12-nautical-mile zone of China’s recently constructed or expanded outposts. A recent symbolic sail-through does not change the larger picture.

The contest for influence in the Indian Ocean is pivotal to determining the direction of Asian security and shaping the international maritime order. As U.S. Admiral Samuel Locklear has noted, two-thirds of the world’s 300 submarines that are not part of the U.S. Navy (which deploys 73) are already in the Indo-Pacific region. This is a game that democratic powers must positively influence to underpin peace, stability and prosperity in the Indian Ocean and the wider Indo-Pacific region.

Brahma Chellaney is a geostrategist and author. He is currently professor of strategic studies at the Center for Policy Research in New Delhi; a fellow of the Robert Bosch Academy in Berlin; and an affiliate with the International Centre for the Study of Radicalization at King’s College London.