BY BRAHMA CHELLANEY, The Japan Times 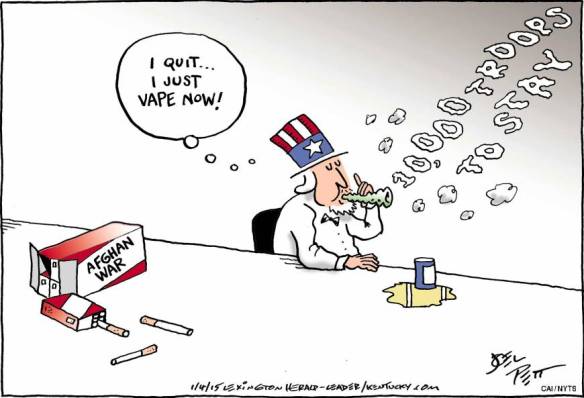 The U.S., after militarily toppling the Taliban from power in Afghanistan in 2001, has spent 14 years battling this militia in a still-raging war whose goal in recent time has turned farcically to making peace with the enemy. The result is that America’s longest war in history is getting even longer, with Obama’s overtures to the Taliban exposing fatal flaws in his Afghan policy.

Amending the name of the U.S.-led NATO intervention in Afghanistan from Operation Enduring Freedom to Operation Resolute Support with effect from Jan. 1 has changed little, despite the Afghan forces shouldering increased warfighting responsibilities.

The White House claims that U.S. strikes now are essentially for protection of American soldiers still stationed in Afghanistan and for combating al-Qaida remnants. In truth, it is the Taliban’s advances that are triggering everyday U.S. combat missions, including warplane and drone attacks and Special Operations raids.

Ghani, who has yet to appoint a defense minister, allows the U.S. to run the war, content to play second fiddle to Gen. John F. Campbell, the top American commander in Afghanistan.

The Taliban militia, despite its recent talks with the Afghan government, has stepped up attacks on members of Afghanistan’s military and police. One such attack, which inflicted heavy casualties on a police unit in Badakhshan province, occurred while the talks were under way in Qatar.

Civilians, however, continue to bear the brunt of the fighting. The United Nations documented 10,548 civilian casualties — a record — in increased ground fighting just last year.

Obama has already missed the 2014 deadline he himself laid down for withdrawal of U.S. forces from Afghanistan. Now he is set to miss his revised deadline to pull out U.S. troops by January 1, 2016. Scrapping the scheduled halving by this year-end of the about 10,000 U.S. troops still deployed, the White House recently decided to maintain the current force level into 2016. Indeed, the duration of U.S. military presence has become open-ended.

Obama’s premature declaration that America’s long military campaign against the Taliban is over will be remembered much like his predecessor George W. Bush’s 2003 “Mission Accomplished” speech on the Iraq war. It was Obama that ended Bush’s Iraq war. Yet by 2014, Obama was back at war in Iraq, relying on the same 2002 congressional authorization that Bush secured for military action there.

In Afghanistan, the main enemy of U.S. forces is the Pakistan-backed Taliban, which has already inflicted far more casualties among American and allied forces than al-Qaida and the Islamic State have managed to do in the countries where they operate. Yet Obama refuses to treat the medieval-theology-hewing Taliban as a terrorist organization. Indeed, the White House has sought to paint the Taliban as a moderate force that can be politically accommodated in Afghanistan’s power structure as part of a peace deal.

Obama’s plans, however, have been upset by the Taliban continuing to play for time. The militia, for example, has rebuffed the idea of a ceasefire.

Still, Obama’s pursuit of a peace deal led him to release top Taliban figures from Guantanamo Bay last year and to allow the Taliban in 2013 to set up in Qatar’s capital Doha a virtual embassy in exile, complete with a flag and other trappings of a diplomatic mission.

Five hardened Taliban militants (two of them wanted for war crimes) were freed not so much to secure the release of a U.S. soldier — Sergeant Bowe Bergdahl, who has now been charged with desertion — as to set the stage for talks with the Taliban, which had sought their freedom as a precondition for direct talks. The release of the five — the “hardest of hard core,” according to Senator John McCain — belied U.S. claims that it doesn’t negotiate with militants over hostages or seek a deal with terrorists. Two of them, Mohammad Fazie and Mullah Nori, are suspected of carrying out massacres of Sunni Tajiks and Shiite Hazaras in Afghanistan.

The Taliban’s Doha office, which was shut after its opening angered then Afghan President Hamid Karzai, has become active again, as the U.S. has eased some restrictions on the Taliban leadership, including travel bans.

Tragically, Obama’s overtures to the Taliban have yielded little more than talks about talks, with the militia dragging its feet on negotiating a peace deal. The May 3-4 “unofficial” talks in Qatar — hosted by the Qatari government and the Pugwash Council — produced only broad thoughts, including that “foreign forces have to leave Afghanistan soon,” that Afghanistan will have an “Islamic” government, and that more discussions are necessary to sustain the “peace process.”

The Obama policy has failed to get the Pakistani military to stop sheltering Taliban’s top leadership or to cease treating the militia as an invaluable asset for gaining “strategic depth” in Afghanistan against India. Obama has showered Pakistan with generous aid to secure its cooperation, unveiling $1 billion recently in new assistance flow and another $1 billion package of missiles, helicopters and other weapons.

More fundamentally, Obama’s faltering strategy to win over the Taliban serves as a cautionary tale of how not to make peace with an enemy. Indeed, in a reflection of America’s shrinking options, its success or failure in Afghanistan now hinges on a limited issue — whether it can prevent the Taliban from marching into Kabul.

Despite Obama’s decision to put off a further drawdown of U.S. forces, the Taliban continues to incrementally gain ground. For example, its forces have advanced to the outskirts of the capital of the northern province of Kunduz.

The Taliban, with its top leadership ensconced in Pakistan, no longer has a centralized command and command. Its field commanders are becoming increasingly autonomous.

Worried about desertions from its ranks to the ISIS, a new player in Afghanistan that claimed responsibility for the April 18 series of deadly explosions in the eastern city of Jalalabad that left at least 34 people dead, the Taliban knows that a peace deal offering Obama what he wants — a way to declare victory before his exit from office — will be its death knell. In fact, to stop the erosion in its support, the Taliban is seeking to match the brutal tactics of the ISIS.

The Taliban’s larger strategy to return to power is simply to wait out the Americans.

Before it is too late, Obama must replace his wishful peace-deal pursuit with a clear focus on bolstering the Afghan security forces and finding ways to eliminate the Taliban’s cross-border sanctuaries in Pakistan.

Brahma Chellaney is a geostrategist and the author of “Water: Asia’s New Battleground,” winner of the 2012 Bernard Schwartz Award.