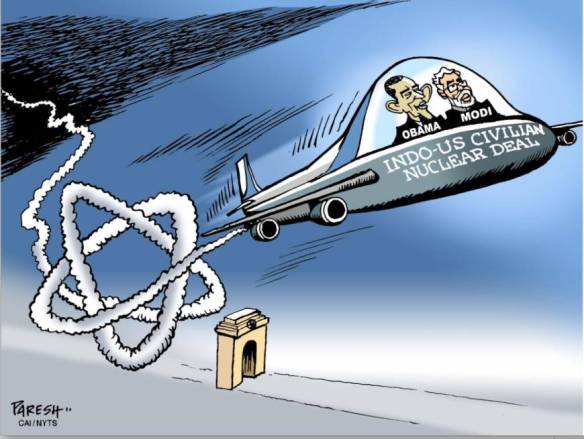 During U.S. President Barack Obama’s recent India visit, a stalled, decade-old civil nuclear deal took center-stage, with the two sides announcing a breakthrough on the contentious issues blocking its implementation — a development that promised to potentially open the path for a Japan-India nuclear deal. It now appears that the breakthrough was more hype than reality and that there is little prospect of the U.S.-India deal’s early commercialization.

With Indian Prime Minister Narendra Modi by his side, Obama announced that “we achieved a breakthrough understanding on two issues that were holding up our ability to advance our civil nuclear cooperation.” The two issues identified were nuclear accident liability and the administrative arrangements to govern the bilateral nuclear cooperation agreement — the successor to an accord the United States unilaterally terminated after India detonated a nuclear device in 1974.

U.S. officials said India agreed to address American concerns over its liability legislation by setting up a $245 million nuclear insurance pool and issuing a “memorandum of law” — essentially an executive action. The Indian foreign ministry, for its part, said “the deal is done,” with the two sides having “reached an understanding on civil nuclear liability and finalized the text of the administrative arrangements.”

But it has now become apparent that the U.S. and India are still locked in negotiations to tie up loose ends and that the much-trumpeted breakthrough was little more than an effort to project a substantive advance during a presidential visit rich in pageantry and symbolism. Obama was the chief guest at India’s Jan. 26 Republic Day parade, a year after Prime Minister Shinzo Abe had that honor.

While claiming a breakthrough, neither side released any details, including on how another sticking point had been resolved: a U.S. demand that New Delhi accept nuclear-material tracking and accounting arrangements that go beyond the safeguards system that the International Atomic Energy Agency (IAEA) has approved and applied to nuclear-armed India’s civilian nuclear program. The U.S. demand entails establishing, on top of the IAEA inspections system, a bilateral safeguards system — an elaborate and expensive arrangement in which India would separately track and account for nuclear materials “by flag” (that is, by each national origin).

The same stumbling block over parallel safeguards in perpetuity has held up India’s conclusion of nuclear deals with Japan and Australia but not with Canada, which dropped that demand. Shortly after Modi took office last May, the Indian foreign ministry conveyed to Tokyo that concluding a nuclear deal must take centerstage during a Modi visit to Japan. Even though Modi postponed his Japan visit by several weeks for unrelated reasons, negotiations failed to yield a deal.

Australia has no nuclear power program, despite holding the world’s largest uranium reserves, and can only offer to export yellowcake, which India is already sourcing amply from other suppliers. Japan’s importance, by contrast, is underscored by two facts: It is the world’s leading supplier of heavy nuclear forgings, with just one Japanese company — Japan Steel Works — controlling 80 percent of the global market for large forged components for light-water reactors (LWRs); and the U.S.-based Westinghouse is owned by Japan’s Toshiba, while another reactor vendor, GE-Hitachi, also headquartered in the U.S., is jointly owned by America’s GE and Hitachi of Japan.

India, pointing out that IAEA safeguards guarantee that all its imported materials are accounted for and devoted to peaceful purposes, has resisted the demand for establishing additional safeguards with America (and Japan) bilaterally, saying this would amount to assuming onerous obligations not envisaged even in the original U.S.-India nuclear deal of 2005.

While the “flagging” arrangements sought by the U.S. and Japan are strictly a government-to-government issue, nuclear liability has become a bone of contention between the Indian government and the firms seeking to export commercial reactors to it — the two U.S.-Japanese private companies, France’s state-controlled Areva and Russia’s Rosatom. The U.S. government, however, has also weighed in against the Indian liability law, calling it an obstacle to the deal’s commercialization.

To be sure, India and the U.S. have made considerable progress in recent months on resolving the sticking points, although a final deal has yet to be clinched. Progress has come mainly due to Indian concessions. But as U.S. Assistant Secretary for State Nisha Biswal admitted last week, the two sides are still “trading paper” and working to stitch up the deal.

The Modi government has yielded ground, even at the risk of facing criticism at home. For example, it has agreed to reinterpret domestic law so as to effectively transfer reactor vendors’ nuclear accident liability risks to Indian taxpayers. Indian law allows suppliers to be held liable in case of an accident. The government is also reinterpreting another provision of the law to bar victims of a nuclear accident in India from suing for damages in the U.S.

These actions are likely to prove controversial, given India’s bitter experience over the 1984 gas leak from an American-owned Bhopal city plant that killed about as many people as the Fukushima disaster. Indeed, Japan’s dual liability laws, which indemnify suppliers and make plant operators exclusively liable, should serve as a sobering lesson for India: GE built or designed all the three Fukushima reactors that suffered core meltdowns in 2011, yet the U.S. firm went scot-free, despite a fundamental design deficiency in the reactors.

To deflect supplier liability, New Delhi — besides creating a nuclear insurance pool to cover suppliers — is issuing a “memorandum of law” incorporating its legal reinterpretations and authoritative clarifications as well as the understandings it has reached with America. But this raises a basic legal question: How can a “memorandum of law,” with no legislative imprimatur and backed merely by the Indian attorney general’s opinion, reinterpret a statute in a way to effectively gut it? Given that such reinterpretation could be challenged in Indian courts, U.S. officials are advising Westinghouse and GE-Hitachi to make their own risk assessment to decide whether to enter the Indian nuclear market.

On the issue of parallel safeguards, New Delhi has agreed to go more than half-way to meet America’s demand, which springs from its Henry J. Hyde Act, enacted in 2006 to govern the nuclear deal unveiled the year before. The Hyde Act calls for a “detailed system of reporting and accounting” of exports to and retransfers within India, including an annual independent audit about the form, amounts and location of exported items.

India will establish a data-sharing and material-accounting mechanism with America. Its “flagging” of materials by nationality will also involve tracking items sourced from third countries but used in U.S.-origin reactors. Yet U.S. House Foreign Affairs Committee Chairman Edward R. Royce has criticized this arrangement as not adequate.

With complex legal, pricing and other issues still pending, the deal’s commercialization is anything but imminent. In fact, the two sides are yet to sign the administrative arrangements, which they announced had been “finalized.”

It is an open question whether the deal will ever yield substantive energy benefits for India, given the exorbitant price of foreign-origin reactors, the concomitant need for India to heavily subsidize the electricity from such plants, and grassroots safety concerns over the Fukushima-type multi-plant nuclear parks earmarked by India for Westinghouse, GE-Hitachi and Areva, each of which is to sell prototype LWR models presently not in operation anywhere in the world. The accident-stricken Fukushima reactors were also the first of their kind.

Adding to India’s risks is its plan to induct a multiplicity of different LWR technologies from the U.S., France and Russia. This will also exacerbate its maintenance challenges.

Consider another issue: Years after the U.S. pledged to bring India into four American-led technology-control cartels — the Nuclear Suppliers Group, Missile Technology Control Regime, Australia Group, and Wassenaar Arrangement — India is still pleading for its admission, with Obama merely reiterating America’s support for India’s “phased entry” into these groups. India now intends to file a formal application for admission to each cartel, in the hope that the U.S. would be more forthcoming in its support than it has been so far.

The Obama visit was a testament to how hyping the nuclear deal obscures more important issues. For example, despite the vaunted U.S.-India Defense Technology and Trade Initiative (DTTI), the U.S. side refused to accept any of the six joint high technology projects proposed by India, insisting that New Delhi first sign “foundational agreements” on military logistics and communication interoperability that America has designed for its allies in a patron-client framework. India, which seeks a level-playing field, is America’s strategic partner, not its ally. The four joint projects announced during the visit are for relatively modest defense products. 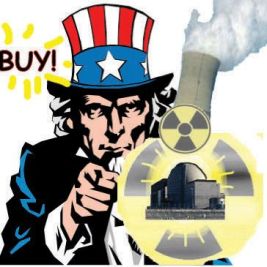 Nuclear power faces an uncertain future, with few new reactors under construction in the West. Yet India has continued to place the nuclear deal at the hub of its relationship with America. Washington has obligingly pandered to this Indian weakness, entering into protracted implementation-related negotiations. The original deal had already spawned multiple subsidiary deals before Obama announced a “breakthrough” on two more auxiliary deals. Each deal has been hailed by New Delhi as a diplomatic success, regardless of the concessions it had to make or the new obligations thrust upon it.

It is past time for India to reduce the salience of the nuclear deal in its relations with America and prioritize other issues concerning its core interests. Why a deal to import reactors to generate an increasingly uneconomical source of energy is critical to Indian interests has never been elaborated by the deal pushers in India other than through beguiling slogans, such as “End of nuclear apartheid against India” and “A place for India at the international high table.” Such imports will create thousands of jobs for American workers but will be out of sync with Modi’s “Make in India” initiative to expand domestic manufacturing base.

India’s diplomatic overinvestment in the nuclear deal has only made it harder for it to address more fundamental issues in its ties with the U.S., including an increasingly one-sided defense relationship. Rarely before has America acquired a major arms client of the size of India so rapidly. It will take concerted efforts, without being weighed down by the nuclear deal millstone, to forge a true, enduring U.S.-India partnership.

Brahma Chellaney, a longtime contributor to The Japan Times, is a geostrategist and the author of the award-winning “Water: Asia’s New Battleground.”