Unless China abandons its unilateralist approach to cross-border rivers and enters into water-sharing arrangements with its neighbors, prospects for a rule-based order in Asia could perish forever.

Asia’s water resources are largely transnational, making inter-country cooperation and collaboration essential. Yet the vast majority of the 57 transnational river basins in continental Asia have no water-sharing arrangement or any other cooperative mechanism. This troubling reality has to be seen in the context of the strained political relations in several Asian sub-regions.

Arrangements in some of these basins, such as the Gandhak, Jordan, and Mahakali, do not incorporate a formula dividing the shared waters between the parties but rather center on specific water withdrawals, transfers, or rights of utilization. An important arrangement in the Mekong Basin is centered on sustainable water management but without any water sharing.

The only treaties in Asia with specific sharing formulas on cross-border river flows are the ones between India and its two downriver neighbors, Pakistan and Bangladesh. The Indus Waters Treaty remains the world’s most generous water-sharing arrangement, under which India agreed to keep for itself only a 19.48 percent share of the waters. (The volume of waters earmarked for Pakistan — by way of comparison — is over 90 times greater than the 1.85 billion cubic meters the U.S. is required to release to Mexico under a 1944 treaty with that country.)

In addition, Soviet-era water arrangements in Central Asia continue to hold, even if tenuously. Such is the competition over scarce water resources that even sharing arrangements are not free of rancor and discord.

More broadly, Asia’s water map stands out for the unique riparian status that China enjoys. It has established a hydro-hegemony unparalleled on any continent. China is the source of rivers for a dozen countries. No other country serves as the riverhead for so many countries. This makes China the driver of inter-riparian relations in Asia. Yet China also stands out for not having a single water-sharing arrangement or cooperation treaty with any co-riparian state. Its refusal to accede to the Mekong Agreement of 1995, for example, has stunted the development of a genuine basin community.

By building mega-dams and reservoirs in its borderlands, China is unilaterally re-engineering the flows of major rivers that are the lifeblood for the lower riparian states.

By fobbing off such accords as water agreements, China creates a false impression that it has cooperative riparian relations. In fact, it is to deflect attention from its unwillingness to enter into water sharing or institutionalized cooperation that Beijing even advertises the accords it has signed on sharing flow statistics with co-riparian states.

These agreements are merely contracts to sell hydrological data, which some other upstream countries provide free to downriver states.

The plain fact is that China rejects the very concept of water sharing. It also asserts a general principle that standing and flowing waters are subject to the full sovereignty of the state where they are located. It thus claims “indisputable sovereignty” over the waters on its side of the international boundary, including the right to divert as much shared water as it wishes for its legitimate needs.

This principle was embodied in the now-discredited “Harmon Doctrine” in the United States more than a century ago. This doctrine is named after U.S. Attorney General Judson Harmon, who put forth the argument that the U.S. owed no obligations under international law to Mexico on shared water resources and was effectively free to divert as much of the shared waters as it wished for U.S. needs.

Despite this thesis, the U.S. went on to conclude water-sharing agreements with Mexico between 1906 and 1944.

China, in rejecting the 1997 U.N. Watercourse Convention (which sets rules on shared water resources to establish an international water law), placed on record its assertion of absolute territorial sovereignty over the waters within its borders: “The text did not reflect the principle of territorial sovereignty of a watercourse state. Such a state had indisputable sovereignty over a watercourse which flowed through its territory.” The Harmon Doctrine may be dead in the country of its birth but it appears to be alive and kicking in China.

In this light, it is hardly a surprise that water has become a new divide in China’s relations with riparian neighbors. This divide has become apparent as Beijing has increasingly shifted its dam-building focus from the dam-saturated internal rivers to international rivers, most of which originate on the water-rich Tibetan Plateau.

Then Indian Prime Minister Manmohan Singh personally proposed to Chinese President Xi Jinping and Premier Li Keqiang, in separate meetings in the spring of 2013, that the two countries enter into a water treaty or establish an intergovernmental institution to define mutual rights and responsibilities on shared rivers. Both Xi and Li, however, spurned the proposal.

The Indian assumption that booming bilateral trade would make Beijing more amenable to solving border and water disputes has clearly been belied.

Only three important transnational rivers — the Amur, the Irtysh, and the Ili, which flow to Russia or Kazakhstan — originate in China outside the Tibetan plateau, whose wealth of water and mineral resources is a big factor in its political subjugation.

China’s water disputes with neighbors extend even to North Korea, with which it has yet to settle issues relating to Lake Chonji and two border rivers, the Yalu and the Tumen. 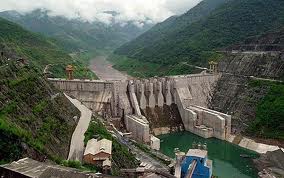 China’s rush to build more dams promises to roil inter-riparian relations, foster greater water competition and impede the already slow progress toward regional cooperation and integration. By erecting dams, barrages and other water diversion structures in its borderlands, China is spurring growing unease and concern in downriver countries. Getting China on board has thus become critical to shape water for peace in Asia.

At a time when dam building has run into growing grass-roots opposition in Asian democracies like Japan, South Korea, and India, China will remain the nucleus of the world’s dam projects. Significantly, China is also the global leader in exporting dams.

While the dams China is building in Africa and Latin America are largely designed to supply the energy for its mineral-resource extraction and processing there, many of its dam projects in Southeast Asia are intended to generate electricity for export to its own market. China is demonstrating that it has no qualms about building dams in disputed territories, such as Pakistan-administered Kashmir, or in areas torn by ethnic separatism, like northern Myanmar.

Transparency, collaboration, and sharing are the building blocks of water peace. Renewed efforts are needed to try and co-opt China in basin-level institutions. Without China’s active participation in water institutions, it will not be possible to transform Asian competition into cooperation.

If China were to accept rule-based cooperation, it would have to strike a balance between its right to harness transnational water resources for its development and a corresponding obligation (embedded in customary international law and the U.N. Watercourse Convention) not to cause palpable harm to any co-riparian state.

A balance between rights and obligations indeed is at the heart of how to achieve harmonious, rule-based relations between co-basin states. To be sure, any water arrangement’s comparative benefits and burdens should be such that the advantages outweigh the duties and responsibilities, or else a key state that sees itself as a loser may walk out of discussions or fail to comply with its obligations.

China must be persuaded that its diplomatic and economic interests would be better served by joining forward-looking institutionalized cooperation. Beijing will need considerable convincing, of course, if it is to participate in any basin-level framework centered on compromise, coordination, and collaboration. If China insists on staying on its current unilateralist course, the risk is not only that it will define and implement its water interests in ways irreconcilable with those of its co-riparian states, but also that prospects for a rule-based order in Asia could perish forever.

Brahma Chellaney is a geostrategist. This is excerpted from his paper in the latest issue of Asian Survey by permission of the Regents of the University of California.