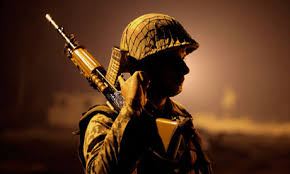 India can no longer evade the question as to why its regional adversaries are able to carry out cross-border acts of aggression with impunity.

Have you thought of why India faces unending cross-border acts of aggression while persisting with a process of dialogue and peace building? Is it merely because India has scofflaw neighbours? Or can at least part of the blame be pinned on India’s pursuit of a foreign policy driven by neither pragmatism nor statecraft?

Take the challenge from Pakistan, a country 1/13th India’s size economically: After suffering each attack since the late 1990s, India has had the same debate, largely centred on the merit of staying put in the process of talks with Islamabad. Few ask the real questions: How many more attacks is India willing to bear? Is there no limit to India’s patience? What has outraged the country over the two recent back-to-back Pakistani acts of aggression — the suicide raid on the Indian consulate in Jalalabad and the ambush-killing of five soldiers along the line of control (LoC) — is more the government’s meek response and prevarications than the attacks themselves.

A key plank of Pakistan’s jihad strategy against India is deniability. Carry out an attack, deny involvement, keep India engaged in talks to serve as a continuing cover, and execute the next attack. This strategy can fool no one. But India’s political class is so corrupt and compromised that it has little time to look beyond self-interest.

Indian leaders are very protective of their own interests. Indeed they have an overinflated view of themselves. Their hard-headedness in serving personal interests contrasts with their faint-heartedness in shielding national interests. If they had spent just a quarter of their time on their primary duty — protection of national interest — the country wouldn’t be in the mess it is today, with the economy sinking, national security under siege, and pessimism reigning.

The foundation of India’s present weak-kneed foreign policy was actually laid between 1999 and 2004 by Atal Bihari Vajpayee, who executed more policy U-turns than probably any other prime minister since independence. Vajpayee’s roller-coaster policy on Pakistan exacted a major toll on institutionalized policy-making, exposing India’s glaring inadequacy to set and unwaveringly pursue clear goals.

Under Vajpayee — who also surrendered India’s Tibet card in a 2003 Beijing visit — personal rather than professional characteristics defined India’s foreign policy. His shifting Pakistan stance traversed through Lahore, Kargil, Kandahar, Agra, and Parliament, before culminating in Islamabad on his second trip to Pakistan as prime minister. It was Vajpayee’s 2001 Agra invitation that helped Pervez Musharraf to come out of the international doghouse for staging a military coup.

In an operation with no parallel in modern world history, the Indian military was kept in war-ready position against Pakistan for 10 months, ostensibly to force Pakistan to dismantle its terrorist infrastructure. Yet, without accomplishing any objective, Vajpayee called off the costly, self-debilitating operation, which the then Navy chief later labelled the “most punishing mistake.” Worse still, Vajpayee during his 2004 Islamabad visit hailed as a big gain Pakistan’s commitment on paper to not let its territory to be used for cross-border terrorism — the very assurance Musharraf had given before Operation Parakram began.

Vajpayee’s swinging policy pendulum emboldened his successor, Manmohan Singh — a foreign-policy greenhorn — to pursue a blinkered approach that blended naiveté with appeasement, thereby inviting greater acts of aggression against India. Mistaking tactics for strategy, Singh has treated the process of engagement with Pakistan (and China) as an end in itself, losing sight of the purpose — putting an end to acts of aggression.

Singh’s fixation on quasi-failed Pakistan has paralleled Vajpayee’s quest to make peace with that implacable enemy. The Vajpayee and Singh eras will also be remembered for the corruption in public life, with scandals at times sought to be deflected through peace building with Pakistan. A famous son-in-law in each of the two eras came to symbolize unbridled corruption.

In this light, is it any surprise that personal and not professional characteristics have shaped India’s foreign policy for almost 15 years now? This trend marks goodbye to institutionalized policymaking.

Singh, of course, has taken appeasement to unmatched levels. In 2006 at Havana, he equated the exporter of terrorism with the victim of its terrorism, setting up the infamous and now-defunct joint anti-terror mechanism. Three years later at Sharm el-Sheikh, Singh included Baluchistan in the agenda — grist for the Pakistani propaganda mill that India was fomenting the insurrection there. This blunder allowed Pakistan to externalize the Baluch problem by turning its terrorism target, India, into the principal accused.

Even the savagery last January when Pakistani troops chopped two Indian soldiers and took away one severed head as a “trophy” failed to stop Singh from returning to business as usual with Pakistan, in spite of his own promise to the nation that it won’t be business as usual. The result is that Singh’s constant engagement of Pakistan has yielded uninterrupted Pakistani acts of military brutality and terror. In fact, the worst acts of cross-border aggression have occurred during Singh’s stint as prime minister.

Instead of dictating terms to Pakistan, India allows Pakistan to retain initiative. Each time India is caught by surprise, it does little more than react passively. Whereas Pakistan’s India policy has remained consistent for long, India’s ad hoc Pakistan policy continues to inflict self-injury.

Make no mistake: India has fashioned its own insecurity trap. To break out of it, it must pursue a clearheaded, goal-oriented foreign policy focused on an assertive promotion of national interests. That process can begin only if India stops looking at inter-country relations through rose-coloured glasses and establishes professional policymaking.

Brahma Chellaney is a professor at the Centre for Policy Research in New Delhi.