The same old scenario has unfolded again: China quietly occupies a strategic area and a diffident India is left preaching the virtues of diplomacy and peace. When China set out to eliminate the historical buffer with India by invading Tibet, New Delhi opposed Lhasa’s desperate plea for a discussion at the United Nations. And when China stealthily took control of the Switzerland-size Aksai Chin plateau and began building the Tibet-Xinjiang highway through it, New Delhi’s first response was to send a démarche asking Beijing naively as to how it despatched workers to Indian territory without seeking visas for them.

Whereas the People’s Republic of China was born in and built on blood, modern India was founded on a continuing myth—that it won independence by non-violence, not because Britain was in no position after the devastation wrought by World War II to hold on to its colonies. It was not until 1962 that India woke up reluctantly to Leon Trotsky’s warning: “You may not be interested in war but war is interested in you.”

But for the lesson of 1962, India’s leaders may still have mocked George Washington’s famous words: “To be prepared for war is one of the most effective means of preserving peace.” Even today, the ruling and opposition leadership remains largely clueless on statecraft and national security affairs. A dysfunctional foreign policy is holding back India’s own rise.

China now is working to alter the line of control bit-by-bit by employing novel methods—without having to fire a single shot. With India a mute spectator, the People’s Liberation Army has brought pastoralists to Uttarakhand’s Barahoti sector and given them cover to range across the line. Using pastoralists in the vanguard and troops in the rear has also been tried elsewhere to drive Indian herdsmen out of their traditional pasturelands and assert Chinese control over those places.

In this way, China is encroaching, little by little, on vantage Indian land in the Chip Chap and Skakjung regions of Ladakh. Chumar in Ladakh was raided last September by helicopter-borne PLA troops, who destroyed Indian bunkers before returning. Arunachal officials are tired of complaining about New Delhi’s nonchalant attitude to aggressive PLA activities along their state’s border. 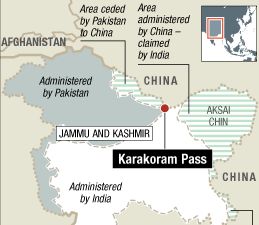 Few thus should be surprised by India’s timorous response to the PLA’s occupation of a border site near the strategic Karakoram Pass linking China to Pakistan. But even by its own standards of appeasement, India has outdone itself with its grovelling reaction to the deepest Chinese incursion in more than a quarter-century.

India initially blacked out the incursion, in the way it has suppressed its own figures showing a rising pattern of Chinese cross-border military forays. A whole week went by before New Delhi said a word on record about the PLA’s furtive ingress. The first public word, tellingly, came after Beijing issued a bland denial of the incursion in response to Indian media reports quoting army sources. Another five days passed before New Delhi revealed the incursion’s true depth—19 kilometres.

The external affairs minister has stood out as the appeaser-in-chief. The incursion is just “one little spot” of acne in an otherwise “beautiful face” to be treated with “an ointment.” When not making such embarrassingly inane comments, he has grovelled, going to the extent of saying that saving Chinese Premier Li Keqiang’s planned visit will take precedence over ending the incursion. He hastily announced his own trip to Beijing, as if paying obeisance at the Chinese foreign ministry—the weakest branch of China’s government—can get the intruders out.

It is a pity that India, instead of feeling insulted by Li’s plan to stop over in New Delhi on his way to his country’s “all-weather ally” Pakistan to bless the new government to be appointed there, is bending over backward at a time of aggression. Has an Indian prime minister dared to combine a Beijing stopover with a visit to China’s rival Japan?  In fact, Taiwan should be to India what Pakistan is to China.

The shocking irony of treating Li’s stopover as exceedingly important is that every high-level Chinese visit since 2006 has been preceded by a new aggressive Chinese move. The jarring revival of China’s claim to the Austria-size Arunachal came just before President Hu Jintao’s 2006 visit. Before Premier Wen Jiabao came calling in 2010, Beijing began questioning India’s sovereignty over Jammu and Kashmir through its stapled-visa policy.

Now Li’s impending visit has gifted a deep incursion, seemingly designed to convey China’s anger over India’s belated, often-fumbling efforts to fortify border defences. To facilitate its encroachments and safeguard its military advantages, China wants India to leave the border minimally guarded by agreeing to limit Indian troop deployments and infrastructure development and by dismantling even the temporary shelters built for Indian border patrols. And New Delhi—which atrociously deploys border police to ward off the aggressive PLA patrols—is publicly signalling that it is open to meeting some of the new Chinese demands in return for the intruders’ withdrawal. Put simply, it is ready to quietly reward aggression, even at the risk of increasing Indian vulnerability.

India’s leadership fails to distinguish between caution and pusillanimity: the former helps to avert problems, but the latter conveys weakness and invites more aggression. India today risks becoming the proverbial frog in the slowly warming pot, as described by the American scholar John Garver: “A Chinese fable tells of how a frog in a pot of lukewarm water feels quite comfortable and safe. He does not notice as the water temperature slowly rises until, at last, the frog dies and is thoroughly cooked. This homily, wen shui zhu qingwa in Chinese, describes fairly well China’s strategy for growing its influence in South Asia in the face of a deeply suspicious India: move forward slowly and carefully, rouse minimal suspicion, and don’t cause an attempt at escape by the intended victim.”