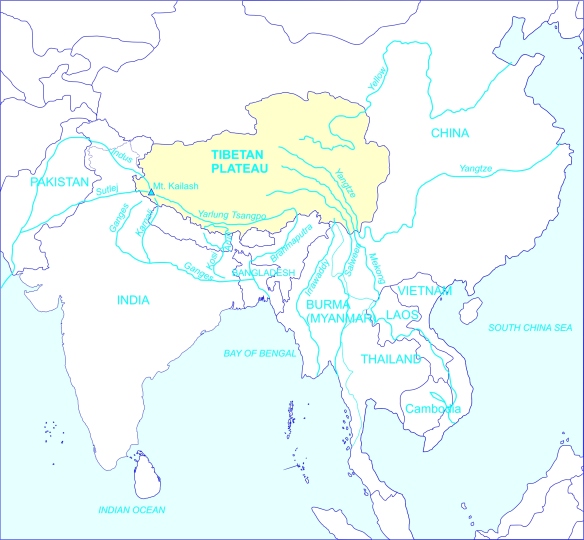 ASIA is the world’s most water-stressed continent, a situation compounded by China’s hydro-supremacy in the region. Beijing’s recent decision to build a slew of giant new dams on rivers flowing to other countries is thus set to roil riparian relations.

China — which already boasts more large dams than the rest of the world put together and has unveiled a mammoth $635-billion fresh investment in water infrastructure over the next decade — has emerged as the key obstacle to building institutionalized collaboration on shared water resources in Asia.

In contrast to the bilateral water treaties between many of its neighbors, China rejects the concept of a water-sharing arrangement or joint, rules-based management of common resources.

For example, in rejecting the 1997 United Nations convention that lays down rules on shared water resources, Beijing placed on record its contention that an upstream power has the right to assert absolute territorial sovereignty over the waters on its side of the international boundary — or the right to divert as much water as it wishes for its needs, irrespective of the effects on a downriver state.

Today, by building megadams and reservoirs in its borderlands, China is working to re-engineer the flows of major rivers that are the lifeline of lower riparian states.

China is the source of transboundary river flows to the largest number of countries in the world — from Russia, Kazakhstan and Kyrgyzstan to the states in the Indochina peninsula and southern Asia. This pre-eminence resulted from its absorption of the ethnic-minority homelands that now make up 60 percent of its landmass and are the origin of all the international rivers flowing out of Chinese-held territory. No other country in the world comes close to the hydro-hegemony that China has established.

Since the last decade, China’s dam building has been moving from dam-saturated internal rivers to international rivers. Most of the new megaprojects designated recently by China’s state council as priority ventures are concentrated in the country’s seismically active southwest, which is largely populated by ethnic minorities. Such dam building is triggering new ethnic tensions over displacement and submergence.

The state council approved an array of new dams on the Salween, Brahmaputra and Mekong rivers, which originate on the Tibetan plateau and flow to southern and southeastern Asia. The unveiling of projects on the Brahmaputra evoked Indian diplomatic concern at a time when water has emerged as a new Chinese-Indian divide, while the Salween projects end the suspension of dam building on that river announced eight years ago.

The Salween — known in Chinese as Nu Jiang, or the “Angry River” — is Asia’s last largely free-flowing river, running through deep, spectacular gorges and glaciated peaks on its way to Burma and Thailand.

Its upstream basin is inhabited by at least a dozen different ethnic groups and rated as one of the world’s most biologically diverse regions, home to more than 5,000 plant species and nearly half of China’s animal species. No sooner had this stunning region, known as the Three Parallel Rivers, been added to the World Heritage List by Unesco in 2003 than Beijing unveiled plans for a cascade of dams near the area.

The international furor that followed led Prime Minister Wen Jiabao to suspend work. The reversal of that suspension, significantly, comes before Wen and President Hu Jintao step down as part of the country’s power transition.

The third international river cited by the state council in its new project approvals has already been a major target of Chinese dam building. Chinese engineers have constructed six megadams on the Mekong, including the 4,200-megawatt Xiaowan, and a greater water appropriator, the 5,850-megawatt Nuozhadu, whose first generator began producing electricity last September.

Asia needs institutionalized water cooperation because it awaits a future made hotter and drier by climate and environmental change and resource depletion. The continent’s water challenges have been exacerbated by growing consumption, unsustainable irrigation practices, rapid industrialization, pollution and geopolitical shifts.

Asia has morphed into the most likely flash point for water wars. Several countries are currently engaged in dam building on transnational rivers. The majority of these dams are being financed and built by Chinese state entities. Most Chinese-aided dam projects in Laos, Cambodia and Myanmar indeed are designed to pump electricity into China’s southern electricity grid, with the lower riparians bearing the environmental and social costs.

But it is China’s dam-building spree at home — reflected in the fact that it boasts half of the 50,000 large dams in the world — that carries the greatest international implications and obstructs the development of an Asian rules-based order.

China has made the control and manipulation of natural-river flows a fulcrum of its power and economic development. Although promoting multilateralism on the world stage, it has given the cold shoulder to multilateral cooperation among basin nations — as symbolized, for example, by the Mekong River Commission — and rebuffed efforts by states sharing its rivers to seek bilateral water-sharing arrangements.

Beijing already has significant financial, trade and political leverage over most of its neighbors. Now, by building an asymmetric control over cross-border flows, it is seeking to have its hand on Asia’s water tap.

Given China’s unique riparian position and role, it will not be possible to transform the Asian water competition into cooperation without Beijing playing a leadership role to develop a rules-based system.

Brahma Chellaney is the author of “Water: Asia’s New Battleground” and of the forthcoming book “Water, Peace, and War: Confronting the Global Water Crisis.”