The era of cheap oil and gas is over. In an increasingly risky and turbulent world, geopolitics more than supply chain issues has driven up fossil fuel prices and spurred growing energy insecurity.

The war in Ukraine has also made global inflation worse, increased debt and slowed economic growth. Financial markets have become more volatile as they start to price in the dual risk of stagnant economic growth and persistently high inflation.

Yet here’s the paradox: as many as 37 advanced economies, from Japan to Australia and Canada, have joined the unprecedented U.S.-led sanctions campaign to isolate and squeeze Russia. Unwittingly, these countries have created a self-defeating trap: their punitive campaign is raising international energy and commodity prices, as well as Russia’s revenues, despite a significant decrease in its energy exports.

And by fueling inflation at home and cutting into their citizens’ standard of living, those imposing sanctions are imposing costs on themselves, with the International Monetary Fund expecting global growth to slow to 3.6% this year from 6.1% last year.

Against this background, Europe’s ambitious mission to wean itself off Russian fossil fuels has been hailed as a “geostrategic game-changer.” In reality, Europe’s scramble to find alternative energy sources is stoking the further rise of international prices and compounding the debt woes of poorer countries.

More fundamentally, Europe’s energy shift, given the scale of its planned supply switch, is set to trigger costly competition with the thriving economies of Asia, the world’s largest energy consumer.

The 27-country European Union, which consumes 11% of the total global energy supply, currently relies on Russia for 40% of its gas and 25% of its oil.

With OPEC Secretary-General Mohammad Barkindo already stating that there is not sufficient global oil capacity to compensate for the loss of Russian supply, it is no wonder that oil prices immediately jumped 4% earlier this month when the EU proposed a phased ban on imports of Russian oil.

Brent crude futures are currently trading more than 50% higher than last year’s annual average of $70.40. Diesel, meanwhile, is already in short supply, with its price soaring as European distributors move away from Russian supplies, while American and other producers of Liquefied Natural Gas are already struggling to meet the increased demand from Europe.

The U.S., the world’s second-largest natural-gas exporter after Russia, is on track to become the world’s largest LNG exporter this year, overtaking Qatar and Australia. Yet, thanks to Europe’s scramble, U.S. natural-gas prices at home have more than doubled this year, pushing up inflation to a four-decade high of 8.3%.

Still, no region will be more affected by Europe’s shift to non-Russian sources of energy supply than Asia.

By severing its energy ties with Russia and decoupling two interlocked parts of the global energy system, Europe will become the main competitor for the energy that otherwise supplies Asia.

The EU has also opened a path for China to build an energy safety net through greater land-based imports from Russia that cannot be blockaded, even if it were to invade Taiwan.

Rewiring European economies that have long depended on cheap Russian energy will be a costly and lengthy process, requiring the building of new or expanded LNG infrastructure and the recalibrating of oil refineries that are configured for processing only Russian crude.

Meanwhile, the specter of Russia cutting supplies through counter-sanctions has led Europe to frenetically stock up on imported LNG, crude and diesel, often by outbidding Asian buyers.

Since last month, European energy imports from Africa, the Middle East and North America have hit a record high and commanded premium prices. Ironically, the EU is also stocking up on Russian gas, oil and coal, paying Moscow 44 billion euros in just the first two months of the war for such imports, compared with about 140 billion euros for the whole of 2021.

The changing dynamics compound the challenges for Japan, whose companies have invested in the Russian Sakhalin-1, Sakhalin-2 and Arctic LNG 2 projects, each of which has been deemed essential for Japanese energy security. Japan, which relies on Russia for just 4% of its total crude imports and 9% of its gas, is loath to find alternative sources at this stage, despite slapping its own sanctions on Moscow. 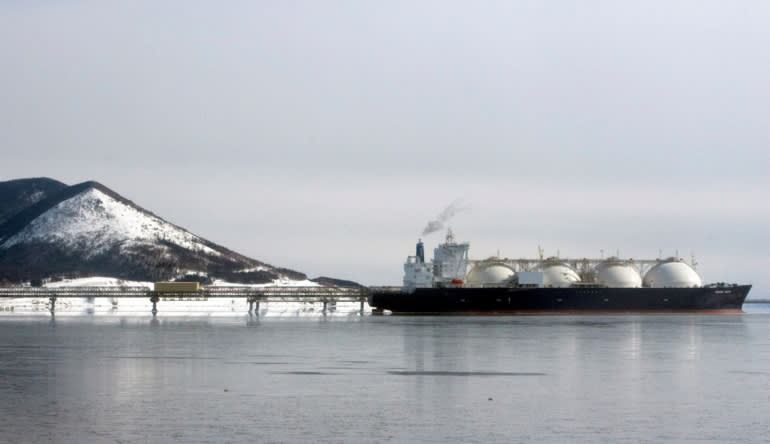 A Japanese-made carrier is anchored near an LNG plant on Sakhalin island: The changing dynamics compound the challenges for Japan.   © Reuters

Replacing just its Sakhalin-2 LNG with spot-market LNG could raise Japan’s total yearly import bill by as much as 50% on current trends. India, one of the world’s largest energy consumers and heavily reliant on foreign supplies, has already seen its energy-import bill rise by billions of dollars per week.

The risk is growing that the EU, in seeking to hurt Russia, may end up hurting itself while severely penalizing developing economies. Higher energy prices will benefit all the world’s major energy exporters, from the U.S. to Russia. According to the Oslo-based Rystad Energy, despite Russian crude production projected to decline sharply in 2022, Moscow’s total income from oil alone is likely to soar to $180 billion, up 45%.

At a time of such geopolitically driven market disruptions, a Europe competing with Asia for securing greater energy supplies will not only continue to drive up prices but also could derail the economic recovery from the pandemic.