BRAHMA CHELLANEY
SPECIAL TO THE GLOBE AND MAIL 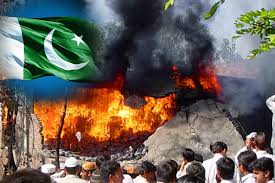 Pakistan’s current faceoff with India has come at an awkward time. All three of its main neighbours – India, Iran and Afghanistan – have accused it of complicity in recent terrorist attacks on their soil. The rising regional tensions, highlighted by Indian and Pakistani tit-for-tat aerial incursions, threaten to complicate U.S. President Donald Trump’s effort to finalize a peace deal with Afghanistan’s Pakistan-created Taliban.

The trigger for the current tensions was a Valentine’s Day attack – claimed by a Pakistan-based terrorist group – that killed 41 Indian troops in the Indian part of divided Kashmir, where the contested borders of India, Pakistan and China meet. That same week, 27 members of Iran’s elite Revolutionary Guards were slain, prompting Tehran to threaten retaliation against Pakistan, while all 32 Afghan troops at a remote base were killed in a Taliban strike.

Pakistan remains a major hub of transnational terrorism. The footprints of many international terrorist attacks have been traced to Pakistan, including the 2005 London bombings, the 2008 Mumbai siege and the 2015 San Bernardino, Calif., killings. The principal architects of the 9/11 attacks in the United States were found ensconced in Pakistan, including Osama bin Laden.

But it is Pakistan’s neighbours that have borne the brunt of its terrorism. Even Bangladesh, which seceded from Pakistan in 1971, blamed its worst terrorist attack on Pakistan’s shadowy Inter-Services Intelligence (ISI) agency.

More than seven decades after it was established as the first Islamic republic of the postcolonial era, Pakistan stares at an uncertain future. Its jihad culture has fostered rising militancy and a serious financial crisis, with the country dependent on bailouts from its patrons, China and Saudi Arabia.

Pakistan’s problems have been compounded by a long-standing nexus between its military and terrorist groups. Nuclear-armed Pakistan is today home to 22 United Nations-designated terrorist entities, several of them reared by its military as proxies. Pakistan’s thriving jihadist groups arose under two military dictators: Muhammad Zia-ul-Haq, who died in 1988, and Pervez Musharraf, who fled overseas in 2008.

Indeed, at the root of Pakistan’s dysfunction are its skewed civil-military relations: The powerful, meddling military, including its ISI agency, remains immune to civilian oversight. Despite an elected government in place, decisive power rests with the military generals, enabling them to maintain ties with terrorist groups.

The current regional tensions have intensified international pressure on the Pakistani military to dismantle the terrorist complex it supports. U.S. Secretary of State Mike Pompeo this week stressed the “urgency of Pakistan taking meaningful action against terrorist groups operating on its soil.” Similar calls have been made in recent days by the European Union and others.

However, such calls are unlikely to be heeded. For Pakistan’s military, waging an undeclared war against India through terrorist proxies remains a useful, low-cost option to contain a larger, more powerful adversary.

The Valentine’s Day attack – the latest in a string of cross-border strikes by Pakistan-backed terrorists – led India to shed its restraint and carry out its first air strike in 48 years inside Pakistan by bombing a terrorist safe haven. This was the first time a nuclear power carried out an air strike inside another nuclear-armed state.

Virtually calling the Pakistani generals’ nuclear bluff, India sent warplanes that deeply penetrated Pakistani air defences and bombed the terrorist sanctuary with impunity. Caught napping, the generals sought to save face with aerial aggression the next day, triggering a brief skirmish over the frontier in which each side lost a warplane.

The matter is unlikely to end there. India’s patience is wearing thin, and it is unwilling to be further gored.

Indeed, behind the recent U.S. decision to cut and run from Afghanistan is the same factor – Pakistan, which harbours not only Taliban leadership and fighters but also the Haqqani Network, responsible for terrorist attacks on American troops and civilians. As the top U.S. military commander in Afghanistan admitted in 2017, “It is very difficult to succeed on the battlefield when your enemy enjoys external support and safe haven.”

The Trump administration’s tentative deal with the Taliban, including an American military exit within 18 months, has come as a shot in the arm for the Pakistani generals. Their long-standing goal to have an Islamist, pro-Pakistan government in Kabul was disrupted when the United States invaded Afghanistan after 9/11 and removed the Taliban from power. But now, the generals hope to realize their goal again.

U.S. negotiators are currently in talks with the Taliban to flesh out the tentative deal. However, U.S. concessions have already emboldened Pakistan’s generals and the Taliban. It may not be a coincidence that the terrorist attacks on Indian and Iranian troops occurred shortly after the tentative U.S.-Taliban deal was unveiled.

Against this background, the crisis in southern Asia will likely rumble on until Pakistan’s military agrees to halt its decades-old use of terrorist proxies to wage asymmetric warfare against neighbouring countries.

The terrorism emanating from Pakistan cannot be stemmed without correcting the country’s civil-military relations. Without civilian control over it, the praetorian military will remain wedded to the export of terrorism, exacting mounting costs for Pakistan, which has already lost American security aid and is now on the grey list of the Paris-based international body combating terrorism financing.

Brahma Chellaney is a geostrategist and award-winning author.