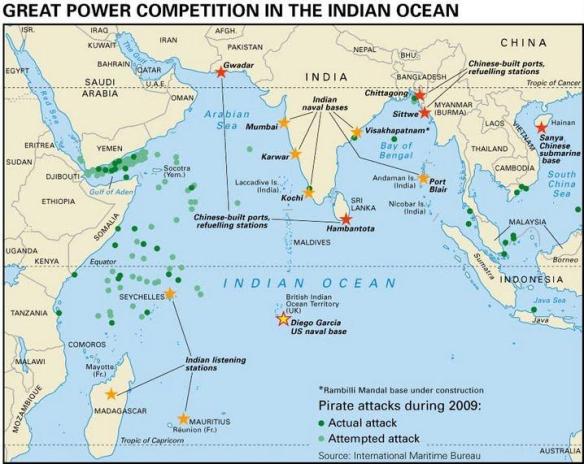 The announcement that China’s first aircraft carrier is ready to set sail as early as this month-end has refocused attention on the larger Chinese naval ambitions. So also has the Pakistani defence minister’s disclosure that his country recently asked China to start building a naval base at the strategically positioned Gwadar on the Arabian Sea. More important, the dual revelations underscore China’s preference for subterfuge in making strategic moves.

After it bought the Soviet-era, 67,500-tonne Varyag carrier— which was not fully complete when the Soviet Union dismembered— China repeatedly denied it had any intention to refit it for naval deployment. For example, Zhang Guangqin, vice-director of the Chinese State Commission of Science, Technology, and Industry for National Defense, said in 2005 that Varyag was not being modified for military use. However, work to refit Varyag had already begun earlier in Dalian, China’s main shipyard.

Yet, to deflect attention from the real plan, the idea to turn Varyag into a “floating casino” off Macau was put forward through the state-run media. And to lend credence to this idea, the smaller two of the three Soviet-era aircraft carriers, including Varyag, bought by China during 1998-2000 were developed into floating museums—one of them briefly before the carrier itself was scrapped. The first official acknowledgement that China was turning Varyag not into a floating casino, but into a fully refurbished, deployable aircraft carrier came this week, just when it became almost ready to set sail.

Subterfuge is also apparent in China’s additional plans at Gwadar, where a Chinese-built but still-underused commercial port opened in 2007. From the time it began constructing the port, Gwadar was widely seen as representing China’s first strategic foothold in the Arabian Sea and being part of its strategy to assemble a “string of pearls” along the Indian Ocean rim. It was known that Gwadar, which overlooks Gulf shipping lanes, would eventually double up as a naval base. Yet all along, Beijing continued to deny Gwadar had any role other than commercial.

So Pakistani defence minister Ahmed Mukhtar’s public comments on a naval base at Gwadar deeply embarrassed Beijing. Mukhtar accompanied Pakistani Prime Minister Yousaf Raza Gilani during a recent trip to Beijing. At the end of the visit, Mukhtar reported that whatever requests for assistance the Pakistani side made, the Chinese government was more than happy to oblige, including agreeing to take over operation of the Gwadar port upon expiry of an existing contract with a Singaporean government company. Beijing also decided to gift Pakistan 50 JF-17 fighter jets.

More important, Mukhtar disclosed that Pakistan had asked China to begin building the naval base. “We would be…grateful to the Chinese government if a naval base is…constructed at the site of Gwadar for Pakistan,” he announced in a statement. He later told a British newspaper in an interview: “We have asked our Chinese brothers to please build a naval base at Gwadar.”

After Pakistan spilled the beans on the planned naval base, Beijing responded with equivocation, saying, “this issue was not touched upon” during the visit. Given China’s proclivity to make strategic moves by stealth, even its work on the Gwadar port was launched quietly. So how can work on a naval base be publicized in advance?

China also does not wish to deepen the concerns it aroused in Asia last year by openly discarding Deng Xiaoping’s dictum, tao guang yang hui (conceal ambitions and hide claws). On a host of issues, including its territorial claims in the South China Sea and against India and Japan, China spent 2010 staking out a more-muscular position.

No less revealing was the gap between China’s words and the reality. For example, it persisted with its unannounced rare-earth embargo against Japan for seven weeks while continuing to blithely claim the opposite in public—that no export restriction had been imposed. Like its denials last year on two other subjects— the deployment of Chinese troops in Pakistani-held Kashmir and its use of Chinese convicts as labourers on projects in some countries too poor and weak to protest—China has demonstrated a troubling propensity to obscure the truth.

The Chinese Communist Party’s hawkish mouthpiece, Global Times, however, has not been shy about advertising China’s interest in setting up naval bases overseas. In a recent editorial titled, “China needs overseas bases for global role,” the newspaper urged the outside world to “understand the need of China to set up overseas military bases”.

The insurrection in the mineral-rich, southern province of Baluchistan against Pakistani rule may impede Beijing’s plan to turn Gwadar into an energy trans-shipment hub transporting Gulf and African oil to western China by pipeline. But the protracted insurgency is no barrier to China’s plan to use Gwadar to project power in the Gulf and eastern Africa and against peninsula India. Indeed, to get into the great-power maritime game, it needs Gwadar to plug its main weakness—the absence of a naval anchor in the Indian Ocean region, where it plans to have important military presence.

In fact, with a second and larger aircraft carrier currently under construction, it may not be long before China shows off its naval prowess by dispatching a carrier battle group to the Indian Ocean.

Brahma Chellaney is professor of strategic studies at the Centre for Policy Research in New Delhi.

Comments are welcome at theirview@livemint.com