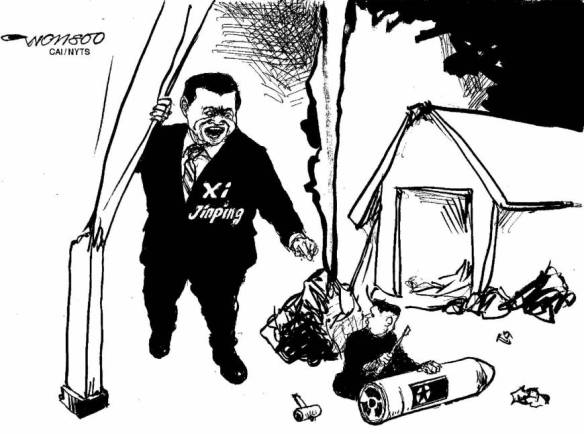 BY BRAHMA CHELLANEY, The Japan Times

The more power China has accumulated, the greater has been its difficulty in gaining genuine allies, underscoring that leadership demands more than brute might. Contrast this with the strong network of allies and partners that the United States maintains in the Asia-Pacific region and elsewhere. The withering of China’s special relationship with North Korea, once its vassal, illustrates Beijing’s dilemma.

Last year, Admiral Harry Harris, commander of the U.S. Pacific Command, said “we have allies, friends and partners where China does not,” while U.S. Secretary for Defense Ash Carter asserted that Beijing is “erecting a great wall of self-isolation.”

The rapid deterioration in Beijing’s ties with North Korea — which boasts good reserves of iron ore, coal, magnesite, graphite, copper, zinc and other minerals — is sure to increase China’s sense of being alone.

Indeed, when Pyongyang recently accused China of “mean behavior” and “dancing to America’s tune,” it underscored not only its ruptured relationship with its powerful neighbor but also the fact that Beijing is now left with just one real ally, Pakistan. Quasi-failed Pakistan, although a useful tool for Beijing to contain India, is a dubious ally for China in the larger context.

China’s rift with Pyongyang has followed the considerable weakening of Beijing’s once-tight hold on Myanmar, another country rich in natural resources — from oil and gas to jade and timber. Today, the Beijing-Pyongyang relationship is at its lowest point since the founding of North Korea in 1948.

The reported fatal poisoning of North Korean ruler Kim Jong Un’s estranged half brother, Kim Jong Nam, at Kuala Lumpur International Airport, represents a major setback for China. Beijing valued him — a faded playboy with residences in Macau and Beijing — as a key asset against the North Korean dictator.

To be clear, China’s vaunted “blood relations” with North Korea have been souring since Kim Jong Un came to power after the death of his father, Kim Jong Il, in December 2011.

Since then, Kim Jong Un has been trying to show that North Korea is no client-state of China, including by rekindling the “juche” ideology of self-reliance. He has defied Beijing by repeatedly conducting nuclear and missile tests and signaled that he wants North Korea to escape from China’s clutches through better relations with the United States — an appeal that has gone unheeded in Washington.

Kim Jong Nam’s death, of course, is a blow not just for China but also for South Korea and the U.S., which had milked him for any intelligence he could provide on the inner workings of the Stalinist regime in Pyongyang. These three countries, recognizing the importance of the Kim family bloodline in dynastic North Korea, had indeed cultivated him as a potential replacement for his half brother. The North Korean ruler thus had ample reason to get rid of Kim Jong Nam.

Earlier in 2013, Pyongyang executed China’s most valued friend in the North Korean power hierarchy — Jang Song Thaek, a four-star general who was Kim Jong Un’s uncle by marriage. Jang, a mentor to Kim Jong Nam and Beijing’s main link to Pyongyang, was accused by the regime of abusing his power to favor China, including by underselling resources like coal, land and precious metals.

At the center of the growing China-North Korea tensions, however, is the bad blood between Kim Jong Un, who at 33 remains the world’s youngest head of state, and Chinese President Xi Jinping, nearly twice as old as him.

When Xi paid a state visit to South Korea in mid-2014, he overturned decades of tradition in which Chinese leaders always visited North Korea first. Xi has yet to travel to Pyongyang, just as Kim Jong Un has refused to visit Beijing. Paying obeisance in Beijing, however, was customary for Kim’s grandfather and father: Kim Il Sung, the founder of the state, paid 37 official visits to China, while his son and successor, Kim Jong Il, went nine times.

The young ruler’s effort to chart an independent course has sparked a sustained propaganda campaign against him in recent years by China’s state media, which has accused him of pursuing “de-Sinification” of his country and seeking to unlock ties with the U.S. and Japan.

Despite its exasperation, China’s options against the Kim regime are limited, given the fact that it does not want the North Korean state to unravel — a scenario that will result in a reunified and resurgent Korea allied with the U.S. The prospect of American troops on its border is a nightmare for China, which explains why it intervened in the Korean War when the U.S. Army crossed the 38th parallel and threatened to advance toward the Chinese border.

For centuries, China has seen the Korean Peninsula as its strategic Achilles’ heel — a region that offers foreign powers an attractive invasion route or a beachhead for attacking China.

Today, China has territorial and resource disputes with North Korea that a reunified Korea would inherit and rail against. The territorial disputes center on Chonji, the crater lake on Mount Paektu (where a 33-km stretch of the Sino-Korean boundary has not been settled) and certain islands in the Yalu and Tumen rivers, whose courses broadly define the frontier between the two countries.

Indeed, as if to signal that its present border with North Korea is not final, China has posted a revisionist historical claim that the ancient kingdom of Koguryo — founded in the Tongge River basin of northern Korea — was Chinese, not Korean, as believed by international historians. A 2012 U.S. Senate report warned that China “may be seeking to lay the groundwork for possible future territorial claims on the Korean Peninsula.”

Against this background, China sees status quo on the Korean Peninsula as serving its interest best. It will likely accept Korean reunification only if it leads to a “Finlandized” Korea making permanent strategic concessions to it.

China’s strongest action against North Korea to date — the recently imposed suspension of coal imports — can be ascribed to the “Trump effect.” U.S. President Donald Trump’s less predictable line, reflected in his wavering on the “one-China” policy and his tougher stance on Chinese expansion in the South China Sea, has prompted Beijing to take this action to blunt U.S. criticism that it is not doing enough to implement United Nations sanctions.

But China’s growing tensions with Pyongyang mean that the value of the North Korea card in Beijing’s dealings with the U.S. is likely to erode. For years, the U.S. has outsourced the North Korea issue to Beijing by offering it concessions. Today, far from credibly serving as Washington’s intermediary with North Korea, China is smarting from Pyongyang’s open disdain for it.

Still, China must grapple with the larger question of whether it can be a peer rival to the U.S. without any allies.

Brahma Chellaney, a longtime contributor to The Japan Times, is a geostrategist and the author of nine books, including “Water, Peace, and War.”