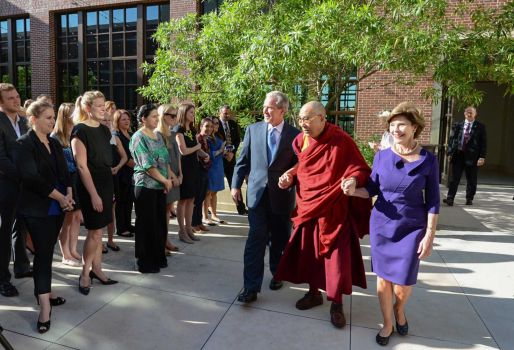 Dalai Lama at the George W. Bush Presidential Center in Dallas on July 1, 2015

On the 80th birthday of the 14th Dalai Lama, who has been in exile in India since 1959, Tibet’s future looks more uncertain than ever. During his reign, the current Dalai Lama has seen his homeland – the world’s largest and highest plateau – lose its independence to China. Once he dies, China is likely to install a puppet as his successor, potentially eroding the institution.

China already appointed its pawn to the second-highest position in Tibetan Buddhism, the Panchen Lama, in 1995, after abducting the Tibetans’ six-year-old appointee, who had just been confirmed by the Dalai Lama. Twenty years later, the rightful Panchen Lama now ranks among the world’s longest-serving political prisoners. China also appointed the Tibetans’ third-highest religious figure, the Karmapa; but in 1999, at age 14, he fled to India.

This year marks one more meaningful anniversary for Tibet: the 50th anniversary of the founding of what China calls the “Tibet Autonomous Region.” The name is highly misleading. In fact, Tibet is directly ruled by China, and half of its historic territory has been incorporated into other Chinese provinces.

With its conquest of Tibet in 1950-1951, China enlarged its landmass by more than one-third and fundamentally altered Asia’s geostrategic landscape. China became neighbors with India, Nepal, and Bhutan, and gained control over the region’s major river systems. Rivers that originate in water-rich Tibet are vital to support the world’s two most populous countries, China and India, as well as the arc of countries stretching from Afghanistan to Vietnam.

For China, capturing the 437-year-old institution of the Dalai Lama appears to be the final step in securing its hold over Tibet. After all, since fleeing to India, the Dalai Lama – Tibet’s rightful political and spiritual leader (though he ceded his political role to a democratically elected government in exile in 2011) – has been the public face of resistance to Chinese control of Tibet. In recent years, however, China has employed its growing influence – underpinned by the threat of diplomatic and economic pain – to compel a growing number of countries not to receive the Dalai Lama, thereby reducing his international visibility.

China’s government, having issued a decree in 2007 that bans senior lamas from reincarnating without official permission, is essentially waiting for the current Dalai Lama to die, so that it can exercise its self-proclaimed exclusive authority to select his successor. China’s leaders seem not to be struck by the absurdity of an atheist government choosing a spiritual leader. It is as if Mussolini had claimed that only he, not the College of Cardinals, could appoint the pope.

The aging Dalai Lama has publicly discussed a range of unorthodox possibilities for the future disposition of his soul – from being reincarnated as a woman to naming his successor while he is still alive. Moreover, he has suggested that the next Dalai Lama will be found in the “free world,” implying that he will be reincarnated as a Tibetan exile or in India’s Tawang district, where the sixth Dalai Lama was born in the seventeenth century.

Such declarations have motivated China to claim, since 2006, India’s entire Arunachal Pradesh state as “South Tibet” and to press India, in the negotiations over the long-disputed Himalayan border, to relinquish at least the part of the Tawang district located in that state. But the declaration that has most infuriated China was the one he made last December, suggesting that he would be the last Dalai Lama.

China knows that there is every reason to expect that restive Tibet, whose people have largely scorned the Chinese-appointed Panchen Lama as a fraud, would not accept its chosen Dalai Lama. If the Dalai Lama issued clear guidelines about his own reincarnation, Tibetans would be even less likely to accept China’s appointment. The question is why the Dalai Lama has hesitated to do so.

The biggest risk stemming from the Dalai Lama’s passing is violent resistance to Chinese repression in Tibet. As it stands, the Dalai Lama’s commitment to nonviolence and conciliation – exemplified in his “middle way” approach, which aims for Tibet to gain autonomy, but not independence – is helping to ensure that Tibetan resistance to Chinese rule remains peaceful and avoids overt separatism.

Indeed, over the last 60 years, Tibetans have pursued a model resistance movement, untainted by any links with terrorism. Even as China’s repression of Tibet’s religious, cultural, and linguistic heritage becomes increasingly severe, Tibetans have not taken up arms. Instead, they have protested through self-immolation, which 140 Tibetans have carried out since 2009.

But, once the current Dalai Lama is gone, this approach may not continue. Younger Tibetans already feel exasperated by China’s brutal methods – not to mention its sharp rebuff, including in a recent white paper, of the Dalai Lama’s overtures. Against this background, a Chinese-appointed “imposter” Dalai Lama could end up transforming a peaceful movement seeking autonomy into a violent underground struggle for independence.

Given that the rightful Dalai Lama would be a small child, and thus incapable of providing strong leadership to the resistance movement, such an outcome would be all the more likely. China exploited just such a situation, when the current Dalai Lama was only 15, to invade and occupy Tibet.

After the 13th Dalai Lama died in 1933, a leaderless Tibet was plagued by political intrigue, until the present Dalai Lama was formally enthroned in 1950. The next power vacuum in the Tibetan hierarchy could seal the fate of the Dalai Lama lineage and propel Tibet toward a violent future, with consequences that extend far beyond that vast plateau.